Origin football - the best of all? 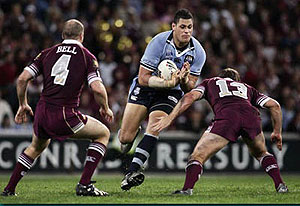 Every year since 1980, the best players born in NSW clash in a three match series against those from Queensland. The media hype leading into the match is huge – with good reason.

The Origin series is one of the biggest sporting events in Australia, up there with the Melbourne Cup, the Boxing Day Test and the Bledisloe Cup. Perhaps bigger than them all.

What is it about the Origin series that invokes such passion and interest?

There’s undoubtedly great history behind the clash. And the ‘state versus state, mate versus mate’ nature of the game brings out the best (and worst) in the players. Then there’s the record of both teams, which is remarkably even. NSW have won 12 series, compared to Queensland’s 11.