Let The Roar of the crowd fix up Rugby 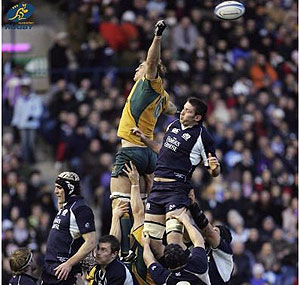 At the beginning of the 2004 season Australian rugby was loaded with cash, the Wallabies had almost won the Rugby World Cup, playing numbers, spectator and television viewing numbers were soaring, and the game looked likely to fulfill John O’Neill’s vision of becoming the second largest football code in the country.

Now in 2007, another World Cup year, rugby is at the nadir with falling crowds, poor performances by Australian teams, administrative inertia and grandstanding and the sense that something is wrong inside the Australian rugby commuinity.

There has been a strong discussion of what is going wrong in The Roar over the past few months. What we want to do now is concentrate this discussion. We want readers to tell us the three main problems facing rugby, and three solutions to the problems.

We will collate all the comments and present them to the ARU for a response, and action. Then we will monitor the ARU on how it attempts to get on top of the problems we’ve exposed.

Share this with a friend – and win a copy of Watching The Rugby World Cup.

In order to get the broadest possible view on this issue – we encourage you to send this article to your friends. A winner will be drawn on 1 June and will win a copy of Spiro Zavos’ Watching The Rugby World Cup.

To kick-off our campaign, here are our thoughts on what is wrong and what needs to be done:

1. Too many administrators are there for their own self-engrandisement. The interests of the stakeholders, especially supporters, are being neglected and ignored.

2. The presentation of the game is woeful.

3. At all levels of rugby, except the grassroots, there is no accountability and too much secrecy.

1. Bring back John O’Neill. Under O’Neill’s administration rugby flourished at every level. He was forced out of the ARU by incompentents who have created rugby’s most serious crisis in the professional era.

2. Get more high level rugby on to free-to-air television. Also better officiating: better coaching: more skilful play from the professional players: and a quick implementation of the Stellenbosch Laws to simplify the laws and take much of the subjectivity out of refereeing.

3. Create an administrative practice at all levels of rugby that is inclusive, open and accountable.