The case of Robbie Deans, Steve Hansen and the NZRU 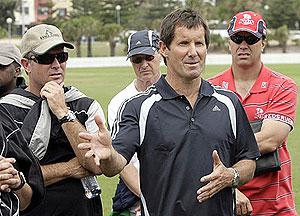 On Saturday the Sydney Morning Herald’s sports section ran a photo of Robbie Deans, the Crusaders coach who is now in line for the Wallaby job, seemingly pointing out something to a group of Super 14 coaches and referees.

The story behind the photo provides a compelling reason why the NZRU has made an outstanding mistake in virtually forcing Deans into the Wallaby coaching job, if he wants it.

I was standing only metres away from Deans when the photo was taken. One of the group was taking some Sydney Grammar boys through the new ELVs for the 2008 Super 14. Deans had pointed out a mistake about where the non-throwing hooker had to stand. Paddy O’Brien, the IRB’s referees boss, intervened in support of the co-ordinator. Deans continued making his point which O’Brien finally agreed was correct.

As the discussion went on, Deans made a point of turning to the coaches when something was settled and saying: ‘Are all the coaches agreed?’ Then he’d lead the discussion into the next point. After the coaching session finished Deans was interviewed about the All Blacks job. He was non-committal. But concluded his interviews by saying, ‘It’s the people’s game, the game belong to them not the officials or the coaches.’

This vignette says a lot about Deans as a coach. He is very well-informed about the laws, which gives him an edge when it comes to developing tactics. He is stubborn when he believes he is right which helps him in planning strategies about the development of his squad. He is a natural coach, in that he has a passion for imparting knowledge. And patience. He’s told me about the hours he spent with Brad Thorne teaching him the intracacies of lineout play using an old boot as a ball.

He admired Thorne for his Christian-based life style and his honesty in rejecting an All Blacks jersey when he was still undecided about returning to rugby league. Deans is very much a coach of players doing the right thing on and off the field (in the style of Wayne Bennett, who he resembles in manner).

Deans’ record with the Crusaders is virtually without parallel for coaches in similar competitions across all the major sports. With the All Blacks going out in the quarter-finals of the 2007 RWC for the first time ever under Graham Henry, why did the NZRU re-appoint a failed RWC coach and reject the Super 14’s most winning coach?

Three factors are involved, in my opinion. The aftermath of the John Mitchell era of 2001 to 2003 when Deans was the assistant coach: the traditional and often vicious Auckland-Canterbury divide in NZ rugby politics: and a split in the Canterbury group.

Mitchell’s team famously lost to the Wallabies in the semi-final at Sydney in the 2003 RWC. It went on to defeat France for third place. It is no secret that Mitchell-Deans believed that if they’d made the final the All Blacks would have won that match. In the semi-final they refused to play Tana Umaga, who was recovering from a knee injury, and played Leon McDonald, who had rarely played at centre. Stirling Mortlock’s interception of a pass to McDonald was the decisive play of the match.

In the fall-out to the RWC loss there were accusations against the Mitchell-Deans team that sponsors were unhappy with their treatment and resentment expressed by former senior All Blacks like Taine Randall, Anton Oliver and Christian Cullen that they’d been treated without respect. Umaga came out strongly last week against Robbie Deans getting the job.

This divide remains with Henry representing the Auckland camp and Deans the Canterbury camp. So it was no surprise that Sean Fitzpatrick and Grant Fox, All Black and Auckland legends, and members of the 1991 side, supported the decision to re-appoint Graham Henry.

Finally, for reasons that have never been made public there has been a split in the Canterbury camp over Robbie Deans. The manager of the All Blacks David Shand and the incoming chief executive of the NZRU Steve Tew have both been described as being hostile to Deans.

Tew played a straight bat during the process of appointing a new coaching panel for the All Blacks for 2008 to 2010. But when questioned about the possibility of losing Deans to Australian rugby Tew remarked: ‘We have plenty of good coaches left in NZ.’ But great coaches like Robbie Deans? I think not.

The vote for re-appointing Henry was 7-1, with a board member from the King Country representing the minor unions voting for Deans. Significantly, the chairman of the Crusaders franchise and deputy-chairman of the NZRU, Mike Eagle, explained his vote for Henry (which was expected to be given to Deans) in this way: Henry had a much better team of coaches around him.

So stupidity by the NZRU has allowed an Australian David Nucifora to be coach of one of NZ’s strongest franchise and tap into the intellectual property of NZ rugby. Warren Gatland, regarded as one of the best coaches in the world, was kept out of the Blues job and has gone to coach Wales. And now the intellectual property developed by the best rugby franchise in world rugby, the Crusaders, has been virtually handed over to Australian rugby.

And why has the NZRU board made this stupid sequence of mistakes? Partly to cover their own blunder in endorsing the failed re-conditioning program which took 22 All Blacks out of last season’s first seven rounds of the Super 14. But more, in my view, to protect the interests of one Henry’s team who is aligned to Steve Tew.

So here is another Fearless Prediction: In two years time, provided the All Blacks do well in their tests (which they should) Graham Henry will stand down as chief coach but will remain on the coaching staff and Steve Hansen, a coach under Deans at the Crusaders, will become the head coach.

You heard it first here.