Jones tumbles from celebrity to pariah 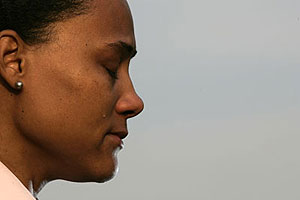 Poised, articulate and gloriously talented, Marion Jones was an immediate sensation on her first tour of Europe in 1997.

Three years later Jones would enter territory where even Lewis and Jesse Owens did not venture.

Jones finished with three golds and two bronzes, was featured on the covers of Vogue, Time and Newsweek magazines and clinched multi-million dollar contracts.

Seven years later the 32-year-old was a sporting pariah after confessing tearfully in public to taking drugs before her Sydney triumphs and was also, according to a report in the Los Angeles Times, heavily in debt.

On Friday, Jones was sentenced to six months in prison for lying to federal prosecutors about her steroid use.

The Jones story began in Los Angeles. She idolised 1988 Olympic double sprint champion Florence Griffith Joyner, who was to die in her sleep 10 years later, and became a top athlete.

There was one small blot on her CV. As a teenager Jones missed a drugs test and her mother hired a lawyer to avoid a four-year sanction.

Her choice was Johnnie Cochrane, who successfully defended OJ Simpson on a murder charge.

Jones won her first world 100 metres title at the 1997 Athens world championships. At the World Cup in Johannesburg the following year she clocked what were to remain her fastest times for the 100 and 200, altitude-assisted marks of 10.65 and 21.62 seconds.

She was married to burly shot putter CJ Hunter, who won the world title at the 1999 Seville world championships but pulled out of the Sydney Games citing a knee injury.

But by then a shadow had fallen over Sydney after Hunter admitted he had tested positive for nandrolone four times in 1999.

Jones stood expressionless beside her man at a packed news conference. So too did Cochrane and former jazz musician Victor Conte, who explained he was Hunter’s nutritionist and said the positive tests must have been the result of a contaminated iron supplement.

Conte was head of the BALCO laboratory which manufactured drugs designed to fool the testers, a scandal which broke when Jones’s coach Trevor Graham sent a syringe of a new steroid tetrahydrogestrinone anonymously to the US Anti-Doping Agency in 2003.

Jones steadfastly denied doping and eventually broke up with Hunter.

In 2002 she found a new partner in Tim Montgomery, who broke the world 100 record in Paris and became the first man to run faster than Ben Johnson, whose gold medal and world record at the 1988 Seoul Olympics were stripped after a positive test.

She and Montgomery courted unwelcome publicity when they trained with Johnson’s former coach Charlie Francis, who had been banned for life from coaching in his native Canada.

Jones did not compete at the 2003 Paris world championships after becoming pregnant and, as the clouds of suspicion thickened, she did not win a medal at the 2004 Athens Olympics.

Her life then slowly but inexorably unravelled, although she continued to vehemently deny ever taking drugs.

Conte went on television to say he had supplied Jones with five different drugs.

In 2005 the Court of Arbitration for Sport agreed there was sufficient evidence Montgomery had taken performance-enhancing drugs supplied by BALCO and he was banned for two years.

Jones escaped a ban in 2006 when a first urine sample tested positive for the blood booster erythropoietin (EPO) but the second proved negative.

In 2007 she finally admitted she had taken steroids before the Sydney Games and all her subsequent marks were expunged.