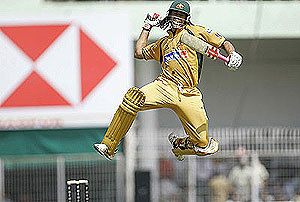 Australian allrounder Andrew Symonds was sold to Indian Premier League franchise Hyderabad for A$1.47 million in the IPL auction at Mumbai tonight, hours after indicating he would not be available for the concurrent tour of Pakistan.

Symonds’ high-priced sale and its circumstances were the major talking points of a day where cricket’s conventions were changed forever, from a game where most players have largely represented the states and nations of their birth to a free market economy more akin to the high stakes gambling of European football.

The Symonds sale was shown in harsh relief against those of Matthew Hayden (Chennai, A$409,000) and Ricky Ponting (Kolkata, A$436,000), who were both snapped up at a bargain rate by comparison but are widely expected to be unavailable due to Australian touring commitments.

Symonds today said he was not satisfied the Pakistan tour could be undertaken safely, and followed up on his December 2007 intimation that he would pull out of the tour if it appeared too great a risk.

“I don’t think I would go, no,” Symonds told Network Ten when asked what his position was on the tour.

“I just dread to think what would happen if someone got hurt, let alone killed.

“It’s just a situation you’d never want to find yourself in.”

Symonds’ possible replacement for a tour of Pakistan, in-form Victorian David Hussey, went to Kolkata for a princely A$740,000, a price no doubt raised tonight by his superlative one day century for the Bushrangers against NSW.

Among previous players up for sale, only Indian one day captain MS Dhoni, the highest profile home player not already attached to one of the competition’s eight franchises, sold for a price in Symonds’ league.

Dhoni cost around A$1.65 million and was picked up by Chennai, who also splashed out about A$656,000 for the signature of Sri Lankan spinner Muttiah Muralitharan.

Adam Gilchrist went to Hyderabad at a cost of A$765,000, while fellow retiree Shane Warne was taken by Jaipur at his reserve price of A$492,000.

The big ticket Kolkata franchise, to be captained by Sourav Ganguly and coached by John Buchanan, has added another personality to the mix by signing ageing Pakistani quick Shoaib Akhtar for A$464,000.

Mumbai secured Sanath Jayasuriya for A$1.064 million and Harbhajan Singh for A$927,000.

Jayasuriya’s high price came as something of a surprise given his age (38), though his hyper aggressive batting is a perfect fit for the Twenty20 format.

Also surprisingly, former Australian spearhead Glenn McGrath and key Pakistani batsman Mohammed Yousuf were pitched back into the player pool after neither was able to reach their reserve price.

Mike Hussey, Justin Langer and Simon Katich were among other players not to be sold at the first time of asking, whereas Kiwi trio Jacob Oram (A$736,000), Brendon McCullum (A$763,000) and Daniel Vettori (A$681,000) all fetched handsome sums.

The masses of cash on display at the auction also had the effect of beefing up the value of each team’s “icon” player, the Indian stars exempt from sale due to their alignment to the team of their region.

Under competition rules these icon players must earn 15 per cent more than the highest priced players at auction, meaning Sachin Tendulkar (Mumbai, A$1.22 million), Yuvraj Singh (Mohali) and Sourav Ganguly (Kolkata) have all been given considerable added value thanks to other bids.