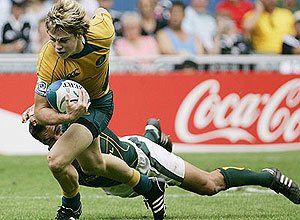 I was watching the Fox Sports presentation of the recent Hong Kong Sevens and a blond-haired, young Australian player caught my eye, and the eye of the commentators.

He was chunky, dynamic, had a great step, ran hard and straight when forcing gaps, passed nicely and was generally abrasive and positive in his play.

He reminded me of the time I went out to Concord Oval with the great rugby columnist Evan Whitton to watch the Australian Schoolboys play the Irish Schoolboys.

A blond-haired inside centre took an inside cut, straightened and then shot, as if jet-propelled, in a dazzling 70m run to the Irish tryline.

We looked at each other the way explorers do when they discover something remarkable. The name on the program of the flashing star was Tim Horan.

At Hong Kong, the flashing new star was named by the commentators as James O’Connor, 18, recruited from school by the Western Force.

Judging by his Hong Kong Sevens form, it must only be a matter of time, late this year perhaps, or next season, for O’Connor to front up in the Force’s backline.

If the promise evolves into performance in the 15-man game, there is a delicious prospect ahead of Force supporters, and Wallaby fans, in due course, of a Giteau-Connor five-eighths combination.

The other point of interest at Hong Kong, and at the IRB Adelaide Sevens, is the wonderful way the New Zealand Sevens side plays and wins its matches.

This outstanding side, surely one of the great teams in world sport right now, has won the last seven IRB Sevens tournaments.

In the crucial semi-final against Fiji, Vito chased and caught the first four kick-offs. This enabled New Zealand to annihilate Fiji.

Gordon Tietjens coaches the NZ Sevens side, and he must be in the running for rugby’s coach of the year.

Every tournament the New Zealand side brings a new tactic or play, all of them perfectly executed. At Hong Kong, for instance, it was chasing and catching the kick-offs.

What will the new tactic be at Adelaide? Will the stars like O’Connor and Vito shine? And will NZ make it eight tournament wins in a row?