Dockers are doing it for themselves

The Crowd
Roar Guru
27th May, 2008
4
Join the conversation
Advertisement
Write for The Roar

Fremantle Coach Mark Harvey has been heavily criticised for fielding an old team, with no future prospects. However, the critics may be forced to retract their comments with Fremantle now fielding two Rising Star nominations so far this season, the first team to do so.

Rhys Palmer was the first nomination after his stellar performance in the Dockers only win this season against cross town rivals, the West Coast Eagles.

Palmer, was selected by the Dockers with selection No.7 in the 2007 AFL Draft. He received a clip from Brett Staker and had to have 10 stitches during the first quarter.

He played on despite the head wound and went on to show immense courage to record 24 touches in the Dockers’ 14-point win.

Young midfielder Garrick Ibbotson has been nominated for the Round 9 Rising Star nomination. He was Fremantle’s best player in its loss to Carlton, using creative play from defence and continuing to pull in impressive marks all day.

It was only the 20-year-old’s seventh AFL match since debuting in Round 11 last year. This season he is averaging 19 disposals a match.

Chris Mayne was also serviceable after his return from injury. Prior to that he was impressive in the Derby win.

Young former Essendon player Keepler Bradley has also rewarded the faith Harvey showed in him after being discarded by Essendon at the end of 2007, being one of Freo’s most consistent big men.

Ruckman Robbie Warnock has shown a great deal of promise and is reportedly in much demand from Melbourne-based clubs. However, Harvey believes that Warnock will stay with Fremantle and become an important part of the side.

In a difficult year for the Dockers, they have used more players from their list than any other side. And, in doing so, have proved that their list shows much promise for the following seasons. 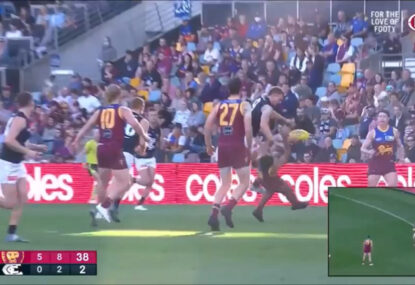