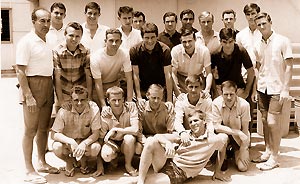 I’ve been so caught up in Arnoldgate the past few weeks that I neglected to mention the recent passing of Billy Rice, one of the original Australian tourists (they were Socceroos in all but name) on this country’s inaugural World Cup campaign in 1965.

Rice (pictured with the 1965 team in Cairns, sixth from left, back row), a centre-half, was from Belfast, Northern Ireland, and played for the Footscray Capri (later JUST) club in Melbourne over 14 seasons and over 500 matches. He played seven times for his country and retired from all forms of football in 1972, making his last appearance in the green and gold against Greece in a friendly in Melbourne 1969.

Famously, though, he was heavily involved in that ill-fated tour of Cambodia and the Far East, which unfortunately for the Tiko Jelisavcic-coached Australians resulted in 6-1 and 3-1 hidings from
the same North Korean side that would go on to shock the world a year later.

In fact, Rice was one of the few players that came out of the two-match World Cup tie in suffocatingly tropical Phnom Penh with his reputation enhanced. But, crucially, not for his football. Rather his spirit.

As I write in my book, 15 Days in June: “In the second game, with five goals against and their chances of qualification as good as dead, the Australians could have opted to surrender meekly and be slaughtered by the Koreans, but they gave it their all, refusing to countenance defeat until the final whistle. Bodies were literally exhausted in the pursuit of a face-saving result.”

None more so than Rice. With much of the squad hampered with gastric problems from the local food and water, he too succumbed with stomach cramps halfway through the game with the score locked at 1-1 but played on right till the end. Substitutions weren’t permitted. The ornery Jelisavcic, however, wasn’t exactly overflowing with gratitude.

John Watkiss explained: “Everybody gave everything they had in that game. It was very hot, very humid, very draining and Billy collapsed after the game. A couple of the guys picked him up and carried him off on their shoulders to the side of the pitch, and Tiko’s reaction was to stand up and say, ‘Let the bastard walk!’ Some of the players flew into him then and he lost all respect from the players after that.”

In his wonderful labour of love Australian Soccer Records, Sid Grant called Rice “a wise captain as well as a grand stopper … [he] won fame as an efficient pivot”.

He stopped playing before I was born but I love the stories about Rice from that tour. In many ways, like some wounded digger on the Western Front, he was the progenitor of the sometimes maligned but intrinsic football myth of the Aussie “fighting spirit”, where stamina and pluck is placed on a pedestal over skill and ability.

Perhaps he never wanted to be remembered for that match, few of his teammates from 1965 do, but like I write in 15 Days, on the turf in Phnom Penh’s Stade Olympique, which is still standing against all the odds, “lie the tread marks of Billy Rice and the ’65 Socceroos. Here, in this forgotten field in South-East Asia, not Germany, is the true place where the legend of the Socceroos was born.”

Which makes Billy Rice, in my view, one of the most historically important figures in the Australian game.