In memory of rugby at Sydney Boys High School 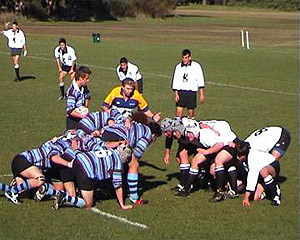 On a sunny winter afternoon some twenty years ago, I was standing at the gates of the venerable main buildings of Sydney Boys High School, chatting with Tony Hannon, the knowledgeable and intense English teacher and long-time coach of the school’s First XV.

A tiny Vietnamese boy carrying a violin case eased his way past us.

“Look at that lad,” Hannon said in mock-outrage. “I’m expected to create First XVs from boys like that.”

He was joking, and we both had a good laugh because it was a good joke. And like all good jokes it was grounded in real life.

The fact was that, more and more, Asian kids were moving into Sydney Boys High, and rightly so as they had the academic qualifications and potential to make the most of their education at the selective high school.

Unfortunately, though, most of these boys were far too small for rugby, even if they were interested in playing the rough game, which they weren’t.

It was a logical ending of a sorts from the Vietnamese lad to the announcement on 24 August, 2007 by the SBHS Headmaster Dr K.A. Jaggar that he was withdrawing the SBHS First and Second XVs from the GPS competition, with the intention of seeking “more competitive’ fixtures.”

“Depending on the strength of our First XV,” the statement continued, “it may play more than one GPS fixture at first grade level next year.”

For all practical purposes, then, the sight of the High boys in the blue and brown stripes playing out their hearts at Mackay Oval and the other GPS venues, and generally losing more games than they won, is now relegated to the sepia-recesses of the collective memories of those who played over the years and those of us, parents, family members and old boys, who loved to watch the teams go round in one of the oldest schoolboys tournaments in world sport.

Wikipedia has a list (unfortunately one that needs updating) of sports stars who have come out of Sydney Boys High School.

In the rugby category, there are some recognisable names: John Brass, Phil Smith (his partner at SBHS and in the Wallabies, who is not on the list), Bob Dywer, Alan Gaffney, Peter Johnson, Jason Jones-Hughes (a centre for Australia and Wales), Duncan McRae, Marc Stcherbina, John Thornett (one of the greatest Wallabies), Chris Whitaker, Jamie Holbrook (not on the list) and Craig Wing.

Those players on the list who were at SBHS in the last twenty years were all products of Tony Hannon’s inspired and generous coaching.

And the mark of all of them? They were all backs, which was a consequence of clever coaching and the fact that they played behind beaten packs.

As a result, they were resilient and intent on doing something with the ball when they had it in their hand.

I remember being on the sideline with coach Hannon when High were playing The Kings School. Kings took an up-an-under penalty. The captain, before booting the ball high into the air and chasing after it enthusiastically, shouted out to his team mates: “Watch McRae’s side step!”

The steepling kick was safely caught by McRae.

The captain hurtled forward to knock him over. At the last moment, like a matador evading a charging bull, McRae deftly faked to move right and moved silkily to his left. And the captain charged on past him as McRae ran up the field to set up a strong counter-attack.

Then there was the time when High went to the fabled fields of St Joseph’s College Hunter’s Hill. The Joeys First XV put on an awesome display to defeat our boys (with Matt Burke leading the way) by 76-0.

After it was all over, and amid the small boys in their blue blazers running around excitedly, I said in awe to one of my sons, “We were lucky to get 0.”

One other memory is of a bitterly cold day with Sydney Grammar playing High. A wiry, good-looking player at first five-eights absolutely carved up the Grammar defence and virtually won the game on his own.

Time after time he burst through a strong defensive line to set up attacks and tries.

After the match Tony Hannon said to me about Craig Wing, with the pride of an old coach who has seen great talent come and go in his time: “He’s the best kid I’ve ever coached.”

So no more Craig Wings, no more John Thornett’s, no more the hundreds of Sydney kids who for over 100 years had that special thrill of pulling on the Sydney High School First XV jersey.

When the writer John O’Hara heard of the death of his friend George Gershwin, he wrote to another friend, “George Gershwin died yesterday. But I don’t have to believe it if I don’t want to.”

GPS rugby for Sydney Boys High School died this season but I don’t have to believe it if I don’t want to.

This is part one of a two part essay by Spiro Zavos. Part two will look at what needs to happen with schoolboy rugby in NSW. Photo from the High Rugby Friends website