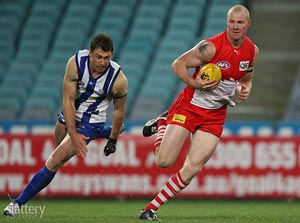 The fair weather fan stayed at home as the Swans attracted their smallest ever crowd to an AFL finals game for last night’s elimination final clash with North Melbourne at ANZ Stadium.

The pre-match prediction of AFL chief executive Andrew Demetriou that the game would be lucky to attract 20,000 proved eerily accurate, with the fixture drawing an official 19,127 spectators.

It was well below the previous lowest crowd for a Swans final in Sydney of 36,076 who attended the qualifying final against St Kilda at the SCG ten years ago.

It was only around half the previous lowest for a final at ANZ Stadium.

Unfavourable weather didn’t help, with 78 millimetres of rain falling over the ground in the 36 hours prior to kick off.

Ironically, last night’s crowd could have comfortably fitted into the reduced capacity at the Swans traditional SCG headquarters, where capacity has been reduced this year because of the building of a new stand.

Demetriou told people at the prematch function that the AFL faced a battle to win the hearts and minds of potential supporters for the second Sydney team, which will debut in the 2012 season.

“We know it is not going to be easy and we know we are in for a battle for the hearts and minds of the Sydney people,” he said.