The Top 5 things I love about Roger Federer 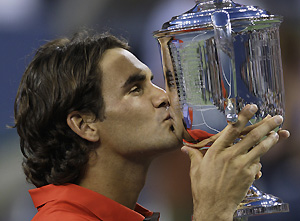 Two great things happened in sport this week. One was Benji Marshall laying on the try of the season against the Titans (inexplicably disallowed by Chris Ward). The second was the Return of the King: Roger Federer. But first a warning: this article contains few jokes and much man love!

Put on the cream blazer and the gold RF-embossed shoes and join me in saluting the greatest tennis player in the world.

Here are five of the many things I love about the Great Man.

1. The single-handed backhand (c)
No man since Pat Cash and Mohammed Azharuddin has packed so much artistry into a wristy cross-court flick, and this one is neither a moron nor a match-fixer.

2. The rippling forehand
Cross-court, down-the line, from the deuce court or on the off, Federer can hit his forehand anywhere, anytime. And find the line. I was going to exclude the French Open, but Federer is arguably in the Top 10 clay court players of all time. Only problem is, he’s lost to the best ever 4 times in a row.

3. The easy movement
Federer does not look particularly quick, particularly tall, or even especially athletic. He actually looks like a fairly normal bloke. He isn’t.

4. The eyes on the ball
The simplest principle of every ball sport (and boring meetings worldwide) is “keep your eyes on the ball.” Easy to say, hard to do. Yet in photos Federer is usually staring at the ball like Mick Dundee at a water buffalo.

5. The charming arrogance
At his best, Federer is delightfully candid about his brilliance. When it’s suggested his play was absolutely amazing he often says, in effect, “you’re right.” Then there are the shoes …