The rise and fall of the non-Victorian sides 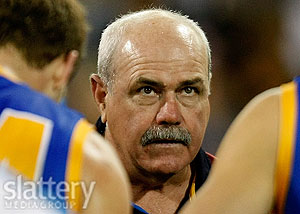 Can it be so? As a result of Sydney’s elimination on Friday night, 2008 will be the first time since 2000 that all four preliminary finalists will be from Victoria. How quickly things can change.

It was just two years ago that all four preliminary finalists were non Victorian teams. The Victorian public were beside themselves: “how dare these ring-ins take the Premiership that is our God given right to win,” they cried.

The AFL Footy Show even had to resort to giving the Melbourne Storm promotion just to restore some pride.

People wanted to know why the non-Victorian teams were faring so much better.

Also, it would be remiss of me not to mention Eddie McGuire’s whingeing about the concessions Sydney and Brisbane get. But I’ll leave that one there.

2008 has truly signaled the return of the Victorian dominance of the AFL. It was the first time since 1989 that a side from South Australia, Western Australia or Queensland had not featured past the first week of the finals.

It was also obvious early on that no non-Victorian side would provide a serious threat to the Premiership.

Answer? Probably a bit of both.

Since Geelong and Hawthorn look set to dominate the AFL for at least the next couple of years, I feel I need to be proactive and suggest the next possible non-Victorian flag winner to outrage the Melbourne public.

It’s hard to see a non-Victorian side stepping up in the immediate future, but the three most promising teams appear to be Brisbane, Port Adelaide and Fremantle.

Fremantle had a disappointing 2008 season, losing a lot of close games – including a one point loss to Geelong. Fremantle’s problem is that they have the ability but lack the self-belief, particularly when they travel.

They have only once won in Sydney, in 1995, and they have never won in Brisbane.

Rhys Palmer won the Rising Star and Paul Haselby will return from injury in 2009, which is encouraging.

But the question remains: can Fremantle put everything together?

Port Adelaide had to believe its team could fluke its way to the Grand Final, but they did just that in 2007, and perhaps it showed this year.

They did have a tough start to the season, but they were a shadow of the team they were in 2007.

Still have a young talented list and have the ability to make the finals in 2009.

Brisbane are definitely on the rise. They looked very difficult beat at the GABBA and should have made the finals this year.

They choked in several matches on the road against ordinary opposition, which hurt them badly.

The re-signing of Jonathan Brown is crucial, and if their young players continue to improve, they could return to their former glory.

Meanwhile Adelaide and Sydney have probably peaked and are on their way down the ladder.

But they have been written off before.

West Coast took a dive worthy of Olympic Gold in 2008 and who knows how they will fare next year.

So for now, the champagne bottles will be flowing in Victoria.