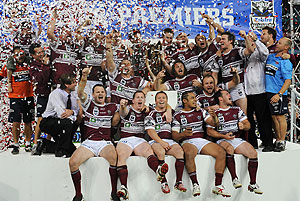 Manly coach Des Hasler looked straight into the camera and without blinking an eyelid uttered his famous words: “We are still flying under the radar.” And for the first time this year Hasler was right. Nobody saw this coming.

More league
Menzies hell for leather in dream farewell
Smith: ‘I wouldn’t have made a difference’

The NRL grand final most had predicted all season ended in a score line nobody could have anticipated.

Manly’s 40-0 flogging of Melbourne was the greatest grand final win in the 100-year history of the game as the Sea Eagles claimed sweet retribution for last year’s disappointing loss to the Storm.

Veteran Steve Menzies capped his marvellous 349 game career with his 180th try and his second premiership ring, 12 years after his first.

Winger Michael Robertson scored a hat-trick, the first since Steve Renouf in the 1997 Super League grand final, as the Sea Eagles ran out eight tries to nil victors.

It is the first time since Manly’s 16-0 triumph over Cronulla in the 1978 replay that a side has been held scoreless in a decider.

The club which was accused of buying premierships in the past tonight claimed their greatest win in Manly’s history was the result of nothing but hard work.

Club co-owner Max Delmege, who saved Manly from extinction six years ago, declared his $10 million investment into the Sea Eagles was worth every cent.

“There is no regrets whatsoever. If somebody was to write a cheque and give it back to me it would probably make my life easier but I would rip it up,” said Delmege.

“This has been a wonderful ride, an amazing experience and I have been repaid 20 times tonight.

“It was something I dreamt of but I didn’t know it was going to come this early.

Hasler couldn’t praise his team enough for their months of hard work to get to this stage, his side’s superior speed and fitness the key difference between the grand finalists.

“I’m just so pleased for them and proud they are able to experience a grand final win,” said Hasler.

“We really wanted to work Melbourne over because they have had a pretty tough month.

“We wanted to make the game as up-tempo as we could.”

The Sea Eagles dominated the speed of the game and after bashing the Storm with their early defence they just blew them away with a rampant finish.

Robertson scored his three tries in 17 minutes to put himself into league folklore for the right reasons.

His biggest claim to fame until now was his infamous ‘wang’ dance after the 2007 grand final defeat, when television cameras captured him jumping around naked in the changerooms.

“This feeling is so surreal at the moment,” said Robertson.

“We are all saying how it just feels like a dream.”

Manly rammed home their dominance with three tries in the final 13 minutes, including the 72nd effort to Menzies which brought the crowd of 80,388 to their feet.

Five-eighth Jamie Lyon had played in last year’s loss and the 2001 premiership defeat with Parramatta and was happy to get his title monkey off his back.

“When we get in that mood we have players that score freakish tries.”

Skipper Matt Orford, who overcame ankle injuries to play in the decider, couldn’t believe how his side systematically dismantled the dominant side of the past three years.

“I feel about 60 at the moment,” the halfback joked.

“It probably has not sunk in yet and that’s probably because of the score line.”

What they said about the NRL grand final:
“I didn’t see that coming.” – Melbourne coach CRAIG BELLAMY.

“I thought Robbo was going to be a bit greedy and get four tries but he was nice enough to give me one.” – Manly legend STEVE MENZIES.

“The whole week was about us. Last year I think we were a little bit guilty of focusing on them too much.” – Manly coach DES HASLER.

“That is the best feeling in the world, I can’t describe it. That’s made my year … now we’ve got memories for the rest of our lives.” – Manly captain MATT ORFORD.

“I just have to give a huge wrap to my guys. I accept this on your behalf, I love yas all.” – Manly’s Clive Churchill medallist BRENT KITE.

“It was terrible last year. It took me months to get over. I’m just glad we got a bit of a consolation today.” – Manly five-eighth JAMIE LYON.

“The first half set it up. We had to come out and play exactly like we did in the first half and we were lucky enough to score a few points in the end.” – Manly fullback BRETT STEWART.

“It was closer than that … I don’t know how (the score) got that high.” – MENZIES again.

“I think one bloke in the team’s not going to make too much difference.” – Suspended Melbourne skipper CAMERON SMITH.

“The only thing I can think of is that we spent ourselves emotionally.” – Retiring Storm veteran MATT GEYER.

“I guess we saved our worst performance for last.” – Storm phenomenon ISRAEL FOLAU.