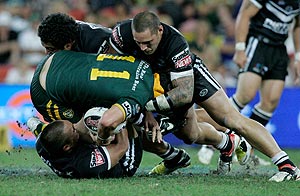 As feared, the 2008-09 Black Caps did not add to the Top 5 Kiwi Cricket Moments in the past fortnight. Their footballing counterparts more than made up for it, however, with a superb effort in the otherwise disregarded Rugby League World Cup.

Much to the delight of the Kiwis, the beaten Kangaroos coach then played his way into the hotly contested list of the Top 5 Sporting Dummy Spits

1. Ricky Stuart, Rugby League World Cup Final, 2008 (c)
A dream combination of big occasion, huge upset and sore losing featuring no less than an allegation that the referees and tournament organisers conspired to fix the result! As brilliant as it was deranged, Stuart claimed extra points for continuing the tirade in the hotel the next day, thereby nullifying the usual defence about “the heat of the moment.” The only bloke happier than the Kiwis was Phil Gould, who happily – and rightfully – called for Stuart to resign. The match also featured The Worst Infield Pass Since Campo’s 1986 Effort To Former Cavalier Mark Brooke-Cowden (abbreviated to WIPSC1986ETFCMBC). Billy Slater, take a bow.

2. Angel Matos, Beijing Olympics, 2008
This Cuban Taekwondo athlete (who knew?) won a gold medal in the 80kg class at the Sydney Olympics but will be remembered by people not named Fidel Castro for his disgraceful effort earlier this year in China. Matos called for an injury break in his bronze medal bout but then took comfortably more than the allowable 60 seconds, despite a warning by the referee. He was duly disqualified. (The whole point of the sport is to kick the crap out of the other guy, so injury breaks are discouraged.) An enraged Matos then proceeded to kick, then punch, the referee in the head! President Castro stood by his man, on the grounds that there had allegedly been poor decisions at the expense of Cuban boxers in the same Games, but the IOC sensibly rejected the idea of transitive sporting robbery and banned Matos for life.

3. Eric Cantona, Manchester United v Crystal Palace, 1995
Another kick, another martial art. Having just been sent off for a malicious tackle, the Man U No.7 took offence to a Place fan’s delicately phrased remarks and executed a flying kung-fu kick to his chest, following up with a multi-disciplinary flurry of punches. What’s French for “mercurial nutjob?”

4. Jon Drummond, World Athletic Championships, 2003
Another big spit on a big stage. Drummond, a famously quick starter in the 100m, was called for breaking in the quarter-finals and immediately disqualified. “Cometh the hour, cometh the man” goes the saying, but in this case the hour came afterwards, the American athlete refusing to leave the track for a full sixty minutes. During that time he staged a Gandhi-style “lie-in,” remaining prostrate just in front of the starting blocks and preventing further racing. Never would an overshot javelin have been more opportune.

5. John McEnroe, Australian Open, 1990
No list of tanties would be complete without the SuperBrat, who has a Lifetime Achievement Award in the discipline of ill-discipline. His performance at Kooyong in 1990 was really the third strike of a memorable hat-trick: the “You Cannot Be Serious!” call at Wimbledon in 1981, the juice-cup trashing in Stockholm in 1984 and finally this episode, which resulted in his ejection from the tournament. McEnroe’s outburst took place during a match against the poor man’s Mats Wilander, Mikael Pernfors, and was a hat-trick in itself: McEnroe successively abused the linesperson, the chair umpire and the tournament referee to earn himself a triple Code of Conduct violation and automatic disqualification. Brilliant!

With thanks to Nicholas Gray, Grant Marjoribanks and Bill Neild for their suggestions (and Bill for the line about the overshot javelin).