An audience with Lance Armstrong, one of the greats 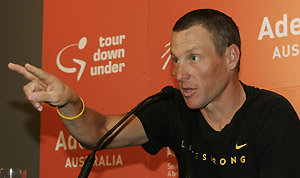 There are a few perks in my line of work. One of them is mingling with your heroes, being in the inner sanctum of major events, in the presence of greats. Lance Armstrong ranks very highly among them.

Here in Adelaide for his return in the Tour Down Under, Armstrong is causing quite storm, and deservedly so.

What comes across from my time with Armstrong?

That’s he a complex individual who is incredibly intelligent, articulate, funny and very aware of how the media works, he takes an immense interest in work written about him, aware of his role as icon and the expectations that come with it.

One international journalist compared the fanfare around Armstrong in Adelaide to Jesus Christ.

This is the rider who transcends cycling and helped its rise despite the drug sagas. The most famous cancer survivor who gives hope and fights hard to eventually eradicate the disease.

Then there is the controversy.

Armstrong maintains he has a clear conscience and I’m sure I’m not the only one that hopes with all hope that he is telling the truth.

Cycling has been plagued with drug cheats, and the history of the sport has often needed a rewrite as the cheats were found out: Landis, Ullrich, Basso, Hamilton and so forth.

Armstrong has committed to stringent drug testing. Has he always been clean?

He has to have been. Surely.

His reasons for a comeback are incredibly noble, and unlike an Ali or Jordan, there is a deeper mission here, one not dependant on results.

“The reasons are twofold. First and foremost we want to take the Livestrong message across the world and the burden of this disease.

“It’s a staggering number when you stop and think about it, it seems like I’ve been off the bike for a while but it’s only been a few years and in the meantime about the same number of people who live in this country are gone.

“That is the main reason. But you still have to have a passion for the sport, and I still do.”

That passion burns deep and don’t think this comeback is half-hearted.

This isn’t a sport for half-hearted attempts. Non-commitment will be punished on the climbs, in the heat and the hours on the saddle.

On the Thursday before the Tour started, in a training ride up the Tours steepest climb Armstrong left his teammates behind. Despite his age, he rode away from them like he has done to countless rivals over the years.

That night he hit the town with old teammate George Hincapie, enjoying Adelaide’s finest beer with a rider and friend who helped guide him to his previous Tour de France crowns.

Armstrong’s presence caused quite a storm in the pub, but he was good enough to mingle with fans and pose for photographs.

The speed and intensity of text messages that flew throughout the city alerting people that the worlds greatest cyclists was frequenting a popular Adelaide pub demonstrated that the capital of South Australia really is one big country town and the popularity of Lance transcends his sport.

We are very lucky to bear witness to a great.