The best Australian cricket team of my lifetime 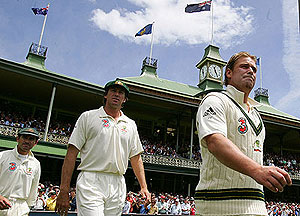 A few weeks ago, Bruce Sheekey nominated Australian cricket’s best ever team. He selected Keith Miller at 6 so that he could have a 2/2 split of fast and spin bowlers.

For his two fast bowlers, he chose Dennis Lillee and Ray Lindwall, writing “before anyone screams ‘what about McGrath?’, seriously, who are you going to drop out of Lillee or Lindwall?”

I found this a thought-provoking question.

Upon reflection, I find it difficult to answer because, being born in 1963, I never saw Lindwall bowl.

What this in turn made me realize is that I have no right to select an all-time Australian team, simply because I have not seen so many of the contenders play.

Rather, all I may legitimately do is select the best Australian Test team from my lifetime of watching cricket, which began with the English tour of 1970/1.

I contend it is a reasonably easy exercise to select the best Australian team of the last 40 years, because I believe that nine selections are incontrovertible:

Notice that I select 12 players, not just because this is usual practice, but also because there is no clearcut selection as fourth bowler.

Now I will discuss the open-ended positions.

Without question, Kim Hughes was the most talented of all other Australian batsmen from the last 40 years, but for obvious reasons he does not come into reckoning.

I would rate Ian Chappell, Mark Waugh, Damien Martyn and possibly Doug Walters as the best of the rest.

Waugh and Chappell both averaged only 42 over their Test careers, but one can probably add about 4 or 5 to this because of their unselfishness: rather than accumulating easy runs, when necessary, they were both happy to sacrifice their wickets in the team cause. Also, they both had a habit of throwing their wickets away once the job was done, as opposed to converting 100 into an average-inflating 200.

Martyn may seem out of place, but he was pure silk, he averaged 46, he had to wait a long time to get a chance, he had periods where he was the best batsman in the world, and his career was really only ended by a series of appalling umpiring decisions against him in England in 2005 (notwithstanding a brief comeback during which he scored arguably the best Australian century of the last decade in Johannesburg).

Whatever, none of these players could be considered an opener, so they cannot be chosen here, and we must look to genuine openers.

Possibly we will allocate this position to Phillip Hughes in the future, but for now it must be given to one of Keith Stackpole, Mark Taylor, Michael Slater or Justin Langer.

Stacky was my first cricketing hero and was the best Australian exponent of the hook shot until Hayden and Ponting came along.

Taylor stands out as a better captain even than the several excellent ones in the team above, so he may be worth selecting for his captaincy. Slater had breathtaking talent – remember, it was he who kept the young Hayden out of the Australian side – and let’s not forget that he scored 14 centuries and 9 nineties.

Langer was arguably the best performed, but he had the considerable advantage of opening with Hayden the colossus.

It wouldn’t be Stackpole, but I find I cannot choose between the other three for this position.

2. SPINNER #2
This would have to be either Ashley Mallett or Stuart MacGill. The leggie took more wickets (208 vs 132) at a phenomenal strike rate (4.72 per test vs 3.47) and slightly lower average (29 vs 30). But wouldn’t it be wonderful to see Warne operate with a high quality finger spinner like Mallett?

Once again I find this very hard to call, but it would probably be Mallett.

3. FAST BOWLER #3
There would be many contenders here: the swing of Max Walker, the brutal speed and hostility of Jeff Thomson, the toil and perseverance of Geoff Lawson, the excellence and sheer class of the injury-prone Bruce Reid, the bluster of the much under-rated Merv Hughes (who is rarely given the credit he deserves for being able to lead an attack. Just ask Allan Border), the athleticism and the statistics of Craig McDermott, and the even greater athleticism and speed of Brett Lee.

And in five years it may be clearcut that this position should go to Mitchell Johnson, given his batting and the left-hand option that he brings.

But for now I find it relatively easy to say that this position must go to Jason Gillespie.

He is similar in many ways to Damien Martyn: a phenomenal natural talent who enjoyed periods where he was the best in the world and who was mysteriously undone by poor form that came out of nowhere in England 2005.

Gillespie’s overall test record 259 wickets at an average of 26 more than matches that of the other candidates for this position.

Perhaps even more importantly, he was a brilliant partnership bowler, which is what is being looked for here, as opposed to an attack leader. Whether bowling with McGrath or Warne, Dizzy really added to the quality of their work. And, of course, Gillespie’s determination with the bat marked him as a real cricketer’s cricketer, a virtue that should not be underestimated.

So there is my Australian XII for 1970-2009: 10 selections and 2 positions that fellow (Roar) selectors may assist me with.

Finally, let’s return to Sheek’s question. DK Lillee is untouchable, so who is more deserving out of Lindwall and McGrath?

It’s hard to argue against McGrath, isn’t it?

One might suggest that McGrath padded out his statistics against minnows, as Murali has spectacularly done. But this is not the case. McGrath played only two Tests against Bangladesh (5 wickets at 24.80) and one against Zimbabwe (6 wickets at 15.00).

Interestingly, Lindwall played just over half of his tests against India (10), New Zealand (1), Pakistan (3), South Africa (8) and the West Indies (10), so it wasn’t as if he was bowling at England all the time.

The Poms may have been stronger in Lindwall’s time than McGrath’s, but McGrath had it tougher against most, if not all, of the other nations.

So again, I cannot see an argument here to go against the statistics.

Similarly, I do not believe one can suggest that McGrath bowled in an era of more bowler-friendly pitches (if anything, the opposite).

So while Lindwall undoubtedly was a phenomenal bowler, I conclude that it’s only if one views the past through rose-tinted glasses that one would select him ahead of McGrath for an all-time team.

Six years on: The greatest comeback in the history of IPL

Six years on: The greatest comeback in the history of IPL