The glorious but sad story of Keith Miller 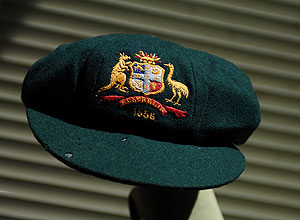 ABC1 has run a special two-part Australian Story documentary on the life of Keith Ross Miller, a cricketing superstar whose glamour and charisma endeared him to people all over the world, but whose life after cricket was a series of tragic misadventures.

The first episode concentrated on his cricket career, which was stellar enough for Michael Parkinson to suggest that Miller was one of the greatest players in the history of the game.

Miller bowled and batted, recalled the starry-eyed Parkinson, a self-confessed hero-worshipper, in the swashbuckling, volcanic, elegant and reckless manner that ordinary cricketers dreamed of emulating but never could, even once in their careers.

The second episode was a grim account of Keith Miller, the playboy, who chased after young women and neglected his family so that several of his boys turned to drugs and were alienated from him.

In his later years his health collapsed.

Two hip replacements made him an invalid dependent on a wheel-chair to get around. Finally, with his looks ravaged and needing constant attention, he left his seriously-ill wife Peggy, to whom he had been married for 60 years, to live with and subsequently marry his Melbourne mistress.

It was clear from their reaction to questions and to the comments they made on various aspects of his life that loyal and loving friends, like Ian Chappell and Michael Parkinson, were deeply upset by aspects of Miller’s self-indulgent lifestyle.

Chappell had the courage to pay a tribute to Peggy Miller at Keith’s funeral when it was clear to him that she was being scripted out of her husband’s life by his second wife.

At the end of the program, Parkinson had to move away from the camera to brush away tears when he tried to talk about this last, awful (for his first wife and his sons) turn in Keith Miller’s life. He finished, however, in avowing that despite everything, he still loved his hero and friend, and would always treasure his memory.

The documentary was introduced by Shane Keith Warne, a latter-day Keith Miller in some respects.

I couldn’t help thinking that Miller was lucky in a sense that he did not live as Warne has in the era of celebrity journalism and promotion. Miller’s high life would have been the stuff of the tabloids, instead of his incisive cricket articles for The Daily Express and The Australian, which were often written despite the fact that he had not actually bothered attending the match that particular day.

Having said this, Miller was a far more likeable, sophisticated, well-educated and well-mannered rogue than Warne.

Miller was a charming man. This is a description that can never be applied to Warne.

Miller’s back story, too, the profound effect his war service in bombers in the Second World War had on his attitude to life, provides a convincing rationale for his determination to live his life as if there was not going to be a tomorrow.

Like tens of thousands of people around the world of a certain age, I grew up with Keith Miller as my sporting hero. Unlike most of these people, I had the supreme pleasure of playing cricket against him and meeting up with him in his later years.

The cricket match was a one-dayer at the Basin Reserve in Wellington in 1961 when a Wellington XI played against the Governor-General’s XI.

The New Zealand Governor-General of the day was Lord Cobham, who as Charles Lyttleton, had played some country cricket in the 1930s. Lord Cobham and Miller were friends and the great cricketer was pulled out of retirement to play one last game.

There is an account of how I faced up to Miller’s opening overs in the cricket anthology, ‘The Longest Game: Best Cricket Writing from Alexander to Zavos’, which edited by Alex Buzo and Jamie Grant (William Heinemann Australia, 1990), and ‘The Pupil Meets the Master’ by Ronald Cardwell (The Cricket Publishing Company, Cherrybrook, 2008).

We batted first and made about 260 or so runs.

In the dressing room before we went out to field we were lectured by our captain Bob Vance about how we had to ensure that Keith Miller got plenty of time to entertain the 4,000 spectators who had packed the ground to see him play.

“Bowlers, just keep the ball away from his stumps when he comes in,” Vance implored. “If he snicks it or hits a catch into the out-field, just drop the ball, but not too obviously. Don’t appeal if you trap him LBW. And don’t try to run him out.”

When Keith Miller came to the crease, walking with that characteristic swagger, looking up at the sky from time to time and occasionally throwing his head back to keep his hair out of his eyes, I felt a certain pang of fear about whether he could deliver what the crowd had come to see.

He had been out of cricket for some years. What if he’d lost his batting genius?

For the next hour or so he belted our bowling all over the field, sometimes over the boundary.

We had an off-spinner, Alan Preston, who had a long and bouncy run-in like Bruce Yardley, and like Yardley bowled quickish dart-ball off-spinners.

As soon as the ball left his hand, Miller was after it coming metres down the pitch to belt it to the boundary.

I had never seen batting like this. It was as if we’d been transported back to the golden age of the game when Victor Trumper was in his prime. We, the players, and the crowd, were enchanted and delighted.

But not our captain, who was intent now on forcing a victory for our side. I went up to him after one particularly savage onslaught and innocently asked: “Can we get him out now?”

“Get the bastard out any way you can,” Vance snapped back me. “Run him out, appeal him out. Let’s just get rid of him. He’s had his fun. It’s time to put a stop to him!”

At Government House that night, the teams enjoyed cocktails and small talk.

Miller was charming, attentive to the women and friendly and manly with the men. There were no airs and graces, just good conversation.

His hero status was entrenched by his civility and charm.

Many years later, the Sydney Morning Herald Sports section ran a series of essays by journalists on the paper about their heroes. I wrote about Keith Miller and the day I played against him.

The next morning, around 9.30, my phone at the Herald rang.

I picked up the receiver. A cultivated, resonant voice asked for “Mr Zavos.”

We chatted for about 40 minutes, probably longer.

He remembered the game well and said that he had enjoyed himself immensely. He was pleased to hear that he’d delighted those of us who so admired him.

When Michael Parkinson said at the end of the Australian Story program that despite everything Keith Miller would always be his hero, I said to myself, “Amen to that.”