The top five most Edible Cricketers 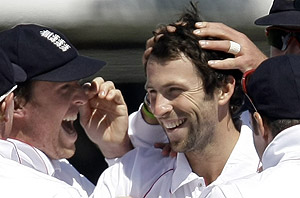 England bowler Graham Onions, right, celebrates with Graeme Swann, left, after taking his second wicket of the day, bowling out West Indies' Devon Smith during the third day of the first Test match between England and West Indies at Lord's cricket ground in London, Friday, May 8, 2009. AP Photo/Matt Dunham

Word games involving cricketers have long been a juvenile pleasure for myself and a handful of mates. Whole elevens have been selected and pitted in battle.

So my email ran hot on Friday when it became obvious there was a new, and automatic selection for the “Edibles XI”, set out below.

For reasons of space, I’ve only put five players on the team sheet. So perhaps readers can help me round out the XI:

1. Graham Onions (c)
A sizzling debut for England over the weekend, which, characteristically, brought tears to the eye.

2. Phil Mustard
This English wicketkeeper-batsman has been compared, by Shane Warne no less, to Adam Gilchrist. I am not convinced. However, he also carries the delightful nickname “Colonel”, after the sometime Cluedo villain (candlestick in the drawing room, from memory).

3. Julian Wiener
The first (and to date, only) Jewish man to play Test cricket for Australia, this blond stalwart of the Melbourne grade cricket scene is also synonymous with a type of frankfurter. Which is odd, given Frankfurt and Wien aren’t even in the same country.

4. Allan Lamb
This pugnacious South African native comes highly recommended by Sam Kekovich, which normally would be an excellent reason not to pick him. However, he is rarely out of form and, let’s face it, is magnificent on Sundays.

5. Clive Rice
Dare I say it, adds starch to the middle order. Although first picked for his country in 1970, isolation – and the cancelled 1970 Australian tour – meant this former South African captain didn’t play an official international until 1991. We, therefore, thought it best he didn’t carry the drinks, as it could have been a long time between them.

Excuse all the awful puns.

Who else would you pick?

With thanks to Nicholas Gray, Bill Neild and Carl McCamish for their input.

Harmanpreet Kaur was trapped in front of her stumps at the pointy end of the Melbourne Renegades’ run chase but was given not-out. Would the match have panned out differently if there was a new batter at the crease with less than two overs to play?

Steketee was included in the South African tour that was cancelled earlier this year. After his impressive seven-wicket haul, five coming on Day 2, and a solid showing against Tasmania previously, does he deserve another look at the Australian test squad or is this just a flash in the pan?

The Queensland Bulls finished up on 2-63 at the end of Day 2 but should really be three-down in their second innings.