Is there anything remaining to say about Super Rugby? 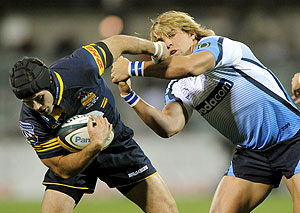 What to write for a readership that knows so much about rugby? That has been an overwhelming thought while trawling the articles and comments on The Roar this week.

For example, I was going to write about the statistical anomalies of the Super 14 season of the Waratahs. However, I find that many of the following facts have already been mentioned this week:

1. NSW have become only the second team to win nine games in a season and not make the semi-finals (the first? See below!).

2. NSW join the 2008 Stormers in becoming only the second team to earn 41 points and not make the semis.

3. NSW have become the first Australian team to win 3 out of 3 in South Africa, and yet somehow they didn’t make the semis.

4. First team to win 4 out of 5 against New Zealand franchises, but not make the semis.

Actually, I’ve made up that points 4 and 5 are firsts, but they are so historically rare – given the way New Zealand has dominated the competition and the way teams perform much better at home – that it seems safe to assume they are firsts (correct?)

One set of statistics I haven’t seen mentioned this week are the winning percentages of teams from each country: New Zealand 54.6%, Australia 51.0%, South Africa 44.6%.

This statistic becomes more graphic, and arguably more meaningful, if one factors out “derbies” (which must give a win and a loss for the locals), and instead one looks at winning percentages against teams from other countries: New Zealand 56.7%, Australia 51.3%, South Africa 42.2%.

There may be some debate about whether Australia has the playing strength for an extra Super Rugby franchise, but one thing is for sure from these numbers: South Africa does not.

Another aspect of the new Super 15 competition announced this week is that every country is guaranteed at least one team in the finals.

This is not quite what John O’Neill wanted for this year: finals with the top 6. Did the ARU boss have a premonition about what was coming in 2009, with Australia’s top 2 teams finishing just outside the top 4?

Speaking of which, the comment boxes on The Roar have been going crazy this week on the topic of whether the Waratahs should be in the top 4.

The villain of the piece is bonus points, without which NSW would have finished 4th ahead of the Crusaders.

This isn’t the first time this has happened, with the Crusaders also being usurpers of an Australian team in 2007: the Brumbies finished 5th with 9 wins (see point 1 above), whereas the Crusaders finished 3rd with 8 wins.

It was with this sort of scenario in mind that three weeks ago I wrote an article “Should bonus points be booted?”

The predominantly Australian readers of the The Roar were strongly in favour of retaining bonus points (BPs), because they encourage positive play. This even despite the fact that BPs clearly work against Australian teams.

At the same time, the majority opinion on talkback radio in New Zealand has been that bonus points are unfair, this despite the fact that evidently they advantage New Zealand teams.

Go figure. Is there some sort of reverse psychology at work here in the differing responses of each country?

Despite having deep respect for the opinions of Roarers, I cannot escape from the fact that the Crusaders “earned” a BP for their loss in the most boring match of Super Rugby ever played, a 0-6 thriller in Dunedin. Ultimately that BP has put them in the semis ahead of the Waratahs. It beats me how it can be argued that this system gives deserved rewards for positive rugby.

Another point I made in my article is that for-and-against largely does the same job as BPs. For example, the top 3 this year would still be Bulls, Chiefs, Hurricanes in that order if one had the simple system (as in most sports, e.g. the NRL) of wins as the first criterion for table position, for-and-against as the second. So why have bonus points?

Having said all the above, I do note that the Crusaders beat every team in the top 6 this year except for the Hurricanes. From this perspective they are deserving of their trip to Pretoria.

How did the Crusaders achieve this with so many injuries, so many departures from last year, and a novice coaching staff? One wonders if they are like the Australian cricket team, which surprised people by not collapsing after all the departures at the end of 2006-7, including that of coach Buchanan (analogous to Robbie Deans).

Perhaps some great teams decline slowly, even after massive changes of personnel? That is what has happened to the Australian cricket team; the Crusaders too?

And so to my article two weeks ago, “Tipping the finalists in this year’s Super 14”. The only thing I was wrong about was the finishing order of the Chiefs and Hurricanes, which I had the other way around.

I admit I had a wimp’s tip for 4th, saying it would be either the Crusaders or the Waratahs or the Sharks – hardly profound.

And certainly as nothing compared with the New Zealand punter who is now $70,000 richer, having last week put $50 on all the victors from last weekend, each to win by 12 points or less.

I find it unusual how close all the matches were last weekend – heck, even the cash-register Reds managed to hang in there with the ‘Canes. GIven this, I wonder whether we are in for a season of cliffhangers in the Trinations.

My tips from here? Well I do not think that the Bulls are the best team in the tournament, but it takes a brave man to bet against them when they are at home against a recently arrived team from 10 time-zones away. And that scenario repeats if they beat the Crusaders.

Finally, who is your player of the tournament?

Mine is Matt Giteau, for his week-in, week-out brilliance.

A close second, and the New Zealand player of the tournament, is Ma’a Nonu for me.

I don’t watch the South African teams as much – see that point about time-zones! – but my stab in the dark for their player of the tournament would be Pierre Spies.