The Wallabies have a great coach, good cattle 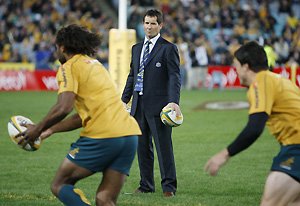 It’s 10 o’clock on Thursday 21 May and we’re at the ARU’s headquarters at St Leonards in Sydney. The reptiles of the media are handed a media release which has the items up front the ARU believes should be the story, or stories, of the day.

We are told that Stirling Mortlock retains the captaincy and, with 25 Tests in charge, is the third most capped Australian rugby union skipper.

There are two newcomers to the squad – Matt Hodgson and Pekahou Cowan – both from the Western Force.  Hodgson, we are told, can cover all three backrow positions and Cowan, a specialist loose-head prop, played tight-head for Australian Schools.

“Both Matt and Peku,” Deans is quoted as saying, “have been included with an eye to the future.”

Cowan as a prop who can play both sides of the scrum presumably (goodbye Matt Dunning?) and Hodgson was a number 8.

George Smith, who I believe should be eased into the number 8 position as a Toutai Kefu type of player, is described as a ‘flanker.’ But shifting him to a position that Deans admits needs more depth would release David Pocock to be a starting open side flanker.

The media release also goes into some detail on why James O’Connor has been brought into the Wallaby squad immediately rather than having the chance to play in the Under-20 IRB World World. Deans, the release states, confirms that O’Connor who played brilliantly at inside centre for the Western Force is “being viewed as a potential fullback option for the Wallabies” (goodbye Cameron Shepherd?)

With only two halfbacks selected – Josh Valentine and the incumbent Luke Burgess – it is clear that Deans is looking for an attacking, break-out type of backline.

My preference in time is for the Wallabies to play Berrick Barnes and O’Connor as the five-eights pairing, with Matt Giteau playing on the wing in the electrifying manner of Shane Williams, providing great support of break-outs and a constant threat by coming into the middle of the field during phase plays and attacking the forwards lined up in defence.

But for this season I think we’ll see a starting line-up (at least until Digby Ioane comes back from injury) of: Burgess, Barnes, Giteau, Mortlock, Tuqiri and Hynes, O’Connor. This looks like a pretty slick combination of age and youth, skills and force.

My only qualification is that it is not an outstandingly quick backline. In due course, someone like the true speedster Lachie Turner (named as a wing/fullback) could force his way into the back starting three.

During the question and answer session between Deans and the media, very little was revealed by the laconic Wallaby coach. What did he think about no Australian side in the Super 14 finals?

“It’s neither good nor bad. We gather as a group starting from now. The critical thing is what we do now.”

Did he have any thoughts on the playing styles of the Australian teams?

Deans clearly was not going to criticise any of the Super 14 coaches (even Chris Hickey, who has been mercilessly and correctly bagged for the dour, ‘win ugly’ style imposed on the NSW Waraths) as his reply indicates: “It’s useful for the players to be exposed to different playing styles. There will be some cross-pollination of ideas coming into the squad.”

And so on, and so on, with the coach, a good cricketer in his younger days, playing a dead bat to all the questions except for one intriquing revelation.

Asked what Hodgson, a smallish and tigerish player at the tackle, could bring to the Wallabies, Deans said that “he suits our needs regarding the changes to the tackled ball rules.”

This little aside gives the clue to why Deans is a great coach. He understands the effect of changes to the laws or the intepretation of them have on the way players can actually play the game.

This new ruling will reward players like Smith, Pocock, Hodgson, Waugh (is this why he is in the squad?), who make a lot of tackles and are fast to the rucks. They won’t have to release if the ruck is formed if they are on their feet.

The Wallabies could, towards the end of some matches, field a loose forward trio of ball-snatchers in Smith, Pocock and Hodgson.

One final point about the 2009 Wallaby squad with its 29 players.

The 2008 squad saw Deans introduce 13 new players. Only Sekope Kepu of that 13 is not in the 2009 Wallaby squad. Kepu has just started playing again after injuring himself on the overseas tour last season.

My contention is that successful coaching is 80 per cent shrewd selecting. Deans is a great selector. The evidence is that all his picks from last year (aside from Kepu) have made the Wallabies this season.

They’re a year older. They’ve matured. And they are ready to kick onto this Test season.