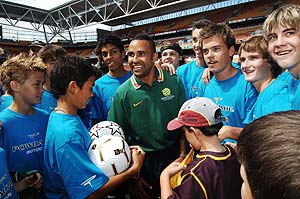 The story of a sixteen year-old Sydney schoolboy’s attempt to begin a youth contract with English Premier League club Aston Villa probably didn’t rate highly on the most-read football stories of the past week.

But in truth, the wider ramifications of the case could have huge consequences for the development of our nation’s future footballers.

The boy in question is Reece Caira, a midfielder previously with Blacktown City. He is eligible for British citizenship through both parents, making it possible for Villa to sign him.

Or so it may have been at one stage.

Football Federation Australia, which had recently flagged a desire to tighten up on the transfer of its budding starlets abroad, now appears to be making Caira’s case its watershed one.

The FFA is, of course, only acting under the guidelines and rights handed to them by FIFA.

Under FIFA laws introduced three years ago, players under the age of eighteen cannot move abroad simply for football reasons.

But youngsters have been able to clinch moves overseas through a loophole that has allowed parents to moved with their children, citing reasons other than football.

The FFA has now decided to crack down on that practice, with Caira’s case the first time the governing body has flexed its muscles.

Presumably, the FFA is not making its decision to change its process on a whim.

But it must still be examined if the shift of policy is the right one for our nation’s youngsters, particularly at the moment.

The FFA, with its countless blueprints and future plans, has identified that a player’s development in the world’s best footballing countries starts far younger than our elite coaching structure has thus far extended.

But is the system ready for the FFA to make the bold statement it is with Caira?

Because, ultimately, what that stance says is that the FFA is confident Caira can get the same standard of training here as he can at Villa’s academy.

Would their development have been the same without that grounding at English academies, with full-time training under some of the world’s most proven youth coaches?

It is highly doubtful.

Caira’s parents have already flagged an intention to distance their son from his Australian ties, and any future national representation, if he is unable to clinch the move to Villa.

That is one issue.

But the real rod the FFA is making for its own back is by acting in the detriment of its own future at national level.

Right now, Australia is not able to offer the same level of full-time expert tutelage English and other major European academies can. And the FFA is kidding itself if it thinks otherwise.

It no doubt has aspirations that – one day – Australia will be able to consistently produce its own home-grown, home-trained stars.

That day will be the one when Australian football really arrives.

But despite all the optimistic press conferences in the world, that day might be further off than the FFA think.

And holding our budding stars back until then won’t help, either.