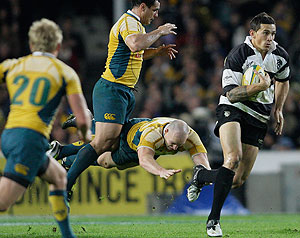 Sonny Bill Williams’ first touch for the Barbarians (7) against the Wallabies (55) saw him step inside Stirling Mortlock. The big crowd at the Sydney Football Stadium erupted in an explosion of noise that carried the message: ‘He is going to make it in rugby union!’

He kept running through the gap and a try looked to inevitable. What a start, the now swelling roaring, seemed to state, a try with his first touch.

One more step on the inside when he should have straightened and he was hit by Luke Burgess covering, and then a swarm of other Wallabies. This time the roars were for the staunch defence of the Wallabies and against Williams as he struggled to break free for the last couple of metres to the tryline.

Then Williams did something that suggests to me, anyway, that he has the making, at age 23 and with a physique of a Jonah Lomu, to be a rugby superstar the way he was a league super star.

As the Wallabies piled in on him, grabbing legs, thigh, chest and arms, he somehow got the ball away, admittedly on the bounce, to his outside. One good further transfer and it would have been try time for the Barbarians.

And throughout the match, although he was feed several hospital passes, and balls so flat and high they could have been caught by defenders, Williams led the Barbarians who had very little ball to play with in off-loads.

He also made a sizzling break down the middle of the field that would have resulted in a try if Justin Marshall, the Barbarians halfback, had got to the ruck near the posts on time.

It was interesting to me to read the Sunday Telegraph’s James Hooper’s analysis of Sonny Bill Williams’ international debut in rugby union and the occasion itself, the first match played in Australia by arguably the most famous club in world rugby, the Barbarians.

The Telegraph stable has rugby league devotees running its sports section and they take every opportunity to denigrate a rugby union occasion. I remember very well, for instance, the opening match of the 2003 Rugby World Cup and seeing rugby league journalists everywhere in the news room.  Why were they here, I wondered? Their bagging articles the next day provided the answer.

So probably the idea was to bag Sonny Bill Williams, the Wallabies and, if this fails, the rugby union game.

Hooper had to admit that Williams showed a lot of ability in his new code: ‘He might be on L-plates in his new game, but there was still enough to suggest Williams can be a force in the 15-man game …’

The sentence is stopped there because the next few words that finish it off give the game away, as it were. After the match Williams joked with some supporters and asked them if any of them had a spare rib as he might be needing some after the tackling he’d been subjected to.

The fierce tackling of the Wallabies, in fact, took away one of the traditional ‘complaints’ of rugby league writers about rugby union, that the tackling is weak. But here was a player who used to stride through rugby league defensive lines, as if they didn’t exist, being dumped and smashed by the supposedly cream puff rugby union defenders.

Now we come back to the last words of that sentence, ‘… if ever they can give him the ball.’

So it is a fault of rugby union that Williams didn’t get the ball very often. And hence the headline: It’s all a waste of Sonny’s talent.

In other words, he should never have left rugby league. And to ram home the message Sonny Bill Watch gave his ‘statistics’ for the match: Tackles 1: Runs 4: Offloads 5: Metres gained 25.

Are these accurate statistics? I saw Williams, for instance, make many more tackles than the 1 recorded?

Moreover, if we had the statistics of Stirling Mortlock they would have shown that he made numerous tackles, many runs, not many off-loads and lots of territory gained. The sort of statistics that were far better than, say, the meagre statistics produced by the NSW centres in the State of Origin match.

When the forwards are not winning the ball, in either code, the backs don’t get chances to run with it. It’s as simple as that.

On the evidence of this match, the Wallabies look to be a sharper side than last year’s team. The speed on the wings helped greatly, as did the overall speed of the side, especially in the loose forwards.

But how good were the Barbarians? Last week they beat England quite convincingly, although they let in three late tries. This England side over the weekend turned around and beat the Pumas, also quite comfortably.

But England were really an England third side, with players with the British and Irish Lions and others in Canada for a tournament. The Barbarians had also travelled from London to Sydney, an arduous journey. Then Rocky Elsom, their only forward currently playing Test rugby pulled out. Their defensive system was leaky and there didn’t seem to be much real pace on the wings.

But you can only play what is in front of you. The Wallabies conceded only one try. Their defence was tough and quick.

The lineout seemed to be good but the scrum folded every now and again. When they ran the ball (there was too much kicking for my liking) the side looked pacy and polished. But best of all there was a quickness about their play which has been lacking for some seasons.

So the verdict: Sonny Bill Williams was good. The Wallabies were much better than last year.