The Top 5 Jailbirds In Sport 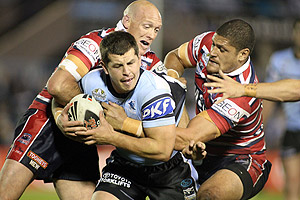 It’s a hotly contested Top 5 this week as we take a look at sportspeople who have lost the plot during their careers to such an extent that they’ve landed themselves in jail. There are many unworthy candidates, so I’ve stuck to one per sport. I welcome your additions and suggestions.

1. Greg Bird (c)
Demonstrated that he was a complete tool early in his career when he kneed Souths player Shane Marteene in the head for no reason as he was getting up to play the ball. Ironically, his suspension was actually shortened to 10 weeks owing to his then clean record.

Bird then proved this conduct was no fluke by earning five charges of common assault against a woman in a Cronulla nightclub – straight to the Nitespots XI for Fusions! – and then glassing his attractive but apparently idiotic girlfriend (how long would a game of Connect 4 take in the Bird house, I wonder?) and trying to pin the blame on his absent flatmate.

In a further twist, celebrity shadowboxer Tony Zappia was mooted as a defence witness in the first case – perhaps the court feels he has some expertise in the field….

2. O.J. Simpson
It takes a big effort to get the NFL spot in this team, with luminaries such as Michael Vick (running a dog-fighting ring) and 6-time Pro Bowler Nate Newton (being caught twice within 5 weeks with a combined total of 388 pounds – a Refrigerator Perry’s worth – of marijuana in his car) pushing hard for places.

But it’s just too hard to go past The Juice. Not for his murderous double touchdown – I dimly recall he escaped jail for that – but for his point after attempt robbing a Las Vegas store at gunpoint. I mean, who commits a crime after beating the rap in the Trial of the Century?

That’s basically breaking into prison. More importantly, who in their right mind would rob a sports memorabilia store – isn’t there enough Genuine Sports Craporama out there that you don’t need to steal it?

3. Navjot Singh Sidhu
Those who enjoyed the Punjabi opener’s assault on Shane Warne in the March 1998 Border-Gavaskar mismatch, spare a thought for then 65 year-old Gurnam Singh, who was bludgeoned to death by Sidhu in 1988 in a road rage incident.

With a cricket bat no less.

Sidhu technically shouldn’t be in this team, as he wasn’t found guilty until December 2006 (not that sports stars get special treatment!) and is still appealing his sentence. However, I would not like his reputation as an interesting, if eccentric commentator, to overshadow the fact that he was guilty of a vicious and deadly assault. He is also shameless, having twice been elected to the Indian parliament, once after being found guilty.

4. Marion Jones
It takes a special effort to go from triple Olympic gold medallist to inmate, especially without stealing anything or assaulting anyone.

However, Jones managed the feat by lying to U.S. federal agents investigating BALCO, the Gen X athlete’s chemist of choice. Jones was stripped of her medals too, although she did win gold in the non-IOC sanctioned Short Track Self-Immolation.

5. Mike Tyson
The sociopath picks himself. And bites his ear off.

For more on the NFL candidates, see The Phat Phree. Well worth a read, and where I got the Nate Newton story from.