Dual nationality can be a double-edged sword 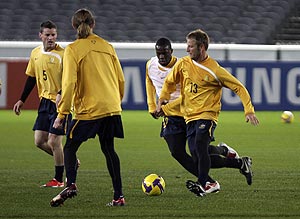 It’s an issue that never seems to be far away, and never fails to polarise public opinion. Our country’s multicultural past has played a huge part in the state of football in Australia today, and players claiming different nationalities through ancestry has been a direct by-product.

But while it has allowed Australian players to more readily move overseas to further their careers, it also throws up the occasional battle for allegiance.

At the 2006 World Cup, three members of Croatia’s squad could have – one day – played for Australia.

On the flip side of the coin, Australia’s side in the quarter-final loss to Italy featured a myriad of alternative nationalities including German, Croatian English, Samoan and Northern Irish.

More recently, tug-of-wars have been fought over Bradden Inman and Rhys Williams.

Inman’s flirtation with the Scottish FA drew plenty of criticism on the various online forums, while there were many who believed Williams played Wales and Australia against each other before committing to the Socceroos.

But do we really understand the full situation?

Take promising left-sided defender Ersan Gulum. Hailing from Melbourne’s Northern suburbs, Gulum plies his trade in Turkey’s Lig 2 with Adanaspor, and the more astute Australian football followers will know he was involved in the Olyroo’s warm-up games prior to the Olympics.

He missed the final cut, alongside some fellow, higher-profile Turkey-based compatriots.Gulum has not received contact from Football Federation Australia since.

Now 22, he holds Turkish nationality through his parents.

And some promising form for his club side – including selection in the league’s team of the season for 2008/09 – has alerted the Turkish FA.

The assistant of national team manager Fatih Terim has watched him in action a handful of times.

“They were very impressed… they liked the way I played,” Gulum said last week, when back in Australia during his off-season break.

“At the moment they’re still in qualifying to try and get into the World Cup, but it’s hard for them. They need to win all their games and other teams have to lose.

“I’ve been told that if they don’t make it to the World Cup, they’re going to start a fresh squad for the next Euros. I’ve been told I’ll get a call up.”

But despite admitting he was “keeping his options open,” Gulum’s allegiances still lie with Australia.

“My first priority is Australia, because they were the first country to call me,” he said.

“I was born and raised in Australia. I feel more at home in Australia than I do in Turkey. Even though I am Turkish, I still feel like an outsider – that’s how they treat you sometimes – so my first choice is playing for Australia.”

Such is the problem that presents itself to many foreign players whose local FA may know more about them than FFA.

It is a far different situation than that of Dean Bouzanis, whose promise allowed him to dip his toes in both Australian and Greek underage teams.

Gulum may not get ample opportunities to represent a country at senior level. If he is to spurn Turkey’s advances, he could be passing up his only chance to play international football.

In the cauldron of Turkish football, he could also adversely affect his club career.

Pim Verbeek has hardly been one to follow public opinion. One needs only to look at his ignoring of very public campaigns for the promotion of Nicky Carle and Australian-Uruguayan Richard Porta in the Socceroos’ set-up.

But in the recent selection of Adrian Madaschi – currently battling away in Italy’s Serie C1 – Verbeek has indicated he is keen to pursue alternative options in defence.

But if Turkey swoops while Gulum’s country of birth stalls, cue howls of derision from Australian football supporters.
But if posed with the same situation, would they really do any different?