The Next 5 things on John O’Neill's To Do list 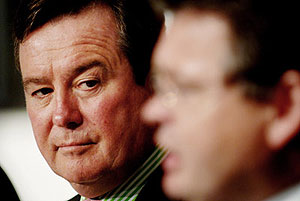 Like him or loathe him, as I presume Lote Tuqiri now does, it’s clear John O’Neill rules Australian rugby with a firm hand. (I was going to say “he casts a long shadow”, but that is true only very late in the day!)

I was even going to put O’Neill in my list of “Top 5 Administrative Strongmen”, along with Blatter, Ecclestone, Samaranch and Pound.

Instead, I thought I’d suggest a few other things he might do now he’s ripped up the contract of the Dark Shark (who, incidentally, and perhaps surprisingly to some, will depart as the Wallabies’ third-highest ever try-scorer).

1. Eye gouge Schalk Burger (c)
Roar captain Spiro Zavos has pointed out the ridiculous leniency of the eight-week penalty given to the Springbok No.8 for attempting to blind Luke Fitzgerald in the Lions Test last weekend. Perhaps O’Neill can dish out the justice the judiciary didn’t by sticking any or all of the seven digits from Lote’s shredded salary straight into Burger’s Aryan iris.

2. Break Richard Loe’s nose
O’Neill would be entitled to stab at this notorious former prop’s eyes as well – just ask Greg Cooper, his sometime All Black teammate (who eye-gouges a teammate?). But an ankle tap at a cocktail function followed by a falling elbow to the snout would somehow be more satisfying – call it the Paul Carozza Snozza.

3. Win the Bledisloe
Around 2001 I started feeling sorry for the All Blacks. They hadn’t won the Bledisloe, Les Frogs had knocked them out of the World Cup and we’d beaten everyone – Lions, Boks and Bleus included – to be the champions of the world. I realise now this was like feeling sorry for Queensland because they were struggling in State of Origin and ergo believing the concept is dead. (Yes, I made that mistake four years ago too.) I’m man enough to admit I was wrong – is The Great O’Neill man enough to bring back the cup? Of course, he’s done the most important part already. Not just hiring Robbie Deans, but spearing Alan Jones!

4. Steal the World Cup from New Zealand
Since he’ll be supporting Dingo and the lads in NZ anyway, why not steal the RWC hosting rights while he’s at it? (It would be nice if he could steal the actual World Cup, but I’m told it doesn’t reside there.) It was a neat trick stealing the tournament in 2003 – I wonder if a repeat is achievable?

5. Get Richie McCaw onside
Ok, I admit it. I’m asking the impossible!

What else would you put his To Do list?