Tom Watson a champion for the ages. 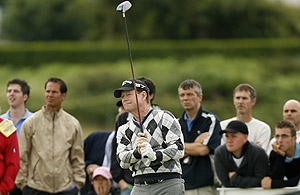 Tom Watson of the US plays a shot on the fifth tee during the opening round of the British Open Golf championship, at the Turnberry golf course, Scotland, Thursday, July 16, 2009. AP Photo/Peter Morrison

I don’t make a habit of watching golf. Whenever I do it reminds me of how badly I play it, locked in irrational combat with my own deficiencies which always win.

Last Monday however was exception time. There was a valid reason for that. Tom Watson was going to win the British Open. He wasn’t just going to win it; he was going to raise the age bar for winners by a full decade.

Pushing sixty, he was going to breathe new life into the game for all those putative pensioners who still play but assume they can’t ever be as good as they were. This was a day for the old guys, a chance for elderly golfers to revel in associated glory.

The golfing world stopped and held its breath. He was cheered on by everyone on the course, even some of his opponents, and by an audience of countless millions on television willing history to be made on the Highland links course of Turnberry.

It might have been the British Open, but the locals weren’t cheering for Englishman Lee Westwood who made a gallant charge toward the end, or even for the Scotsmen in the field. This was a once-in-a-lifetime moment and everybody knew it.

If he was aware of the pressure, Tom didn’t show it.

This courtly, gracious American, so oddly un-American as an identikit modern professional sportsman, wandered calmly after each ball he hit, hindered ever so slightly by a new hip being broken in, and smiled, almost in embarrassment, at the fuss he was generating.

The camera would zoom in on his gently lined features, his gap-toothed smile becoming a kind of talisman for the tournament.

The Scots love him of course. He even looks like one of them with his Celtic complexion and slightly dishevelled manner. He loves Scotland in turn and keeps coming back year after year. He is on record as saying that Britain is the last civilised country in the world.

Watson first won the Open there in 1975, longer ago than almost all of his opponents’ lifespans, and has been contributing to that civilisation ever since.

Watson nearly did it. He should have done it. He got ahead after a couple of rounds and just stayed there. A stroke up at the end, he only had to putt from the edge of the green at the 18th, something he had been doing with consummate accuracy all week and the most significant victory in golfing history – some are saying in the history of sport – would have occurred.

He muffed it; badly. His last putt was a shocker. The lead was tied and he knew then that it had got away from him. I saw him sigh with resignation. Everybody did. Suddenly it was Stewart Cink who the cameras turned to. But only briefly. Cink sunk Watson in the playoff and duly got his trophy and then all the attention turned back to the real winner, Tom Watson, 59.

Somebody asked Watson if he would be back next year. He thought so. His new hip should be properly road-tested by then and he felt he might be a bit more competitive. 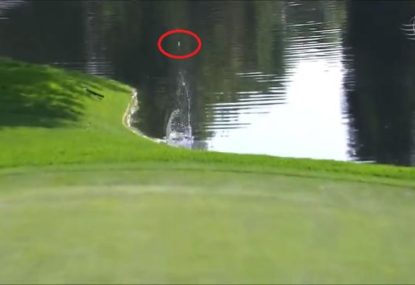