How I gave Mr Cricket his nickname 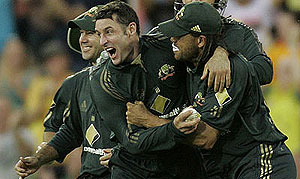 It’s been brought to my attention that in both the English and Australian press, my brother — Graham Swann — has credited me with giving Mike Hussey the nickname, Mr Cricket. So I’ll try to shed some light on the matter.

The Hussey who turned up at Northants in 2001 was a quiet, unassuming, friendly bloke who was desperate to show what he could do.

Despite a relatively quiet start to his county career, it became obvious fairly quickly that he was extremely enthusiastic about the game.

And that is a polite way of putting it.

The first to practice and the last to leave, hitting balls in every spare minute, Hussey certainly gave himself every chance of doing well.

There was even a rumour going around that his girlfriend Amy – now his wife – used to put balls in the bowling machine for him when he couldn’t find a colleague to assist.

His enthusiasm, unsurprisingly, drew the odd comment from his team mates and this is where the Mr Cricket probably came from.

While sitting round during a rain break or after practice, a sarcastic remark concerning Hussey’s love of the game will have been thrown his way.

The majority will have been less than complimentary, but the Mr Cricket has stuck.

I can’t remember if it was me who dreamed it up, but I haven’t had any complaints, so I won’t deny it.