Usain Bolt is the greatest sprinter ever, for now 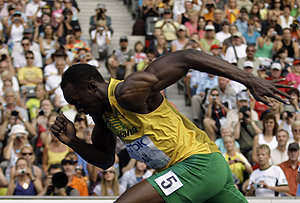 The nature of sprinting is that times improve with better technology by way of faster tracks, gear and starting blocks, more scientific training, and bigger athletes. So what we can say now after Usain Bolt’s latest world record at the world championships in Berlin is that he is the fastest 100m sprinter of all time.

He is arguably the greatest sprinter of all time, too.

The distinction between fastest and greatest is one that involves fact and opinion. My guess is that the only other candidate for the greatest tag is Jesse Owens.

This supreme athlete was also an Olympic gold medalist as a long jumper, a discipline that Bolt has avoided so far in his career.

Owens was totally dominant in his day and reduced the world record for the 100m from 10.3 (Percy Williams in 1930) to 10.2 in 1936. I think that this six- year gap between the two records represents a plus for Owens in that the 10.3 time was clearly a remarkable time for the era.

Just how remarkable can be gauged from the fact that the biggest improvement in the world record time for 100m of 10.4 was made by Charles Paddock in 1921 when he beat the world record 10.6 set in 1912 by Donald Lippincott.

The .2 difference in time set by Paddock is the biggest single advance on the world record time since 1912.

There is a strong argument to be made that Bolt is already a greater sprinter than Owens in terms of dominating his opponents and setting times far in advance of what his contemporaries can achieve.

Bolt set three records since then and has reduced the world record to 9.58, taking .16 off Powell’s time, the second biggest reduction in the history of the event. Experts expect him to improve on this because he is only 22 and sprinters tend to run their fastest in their late 20s.

The Sydney Morning Herald carried a fascinating article on how 100m sprinters have gotten taller, heavier and faster, with Bolt at 1.96cm and 86kg being the biggest of the world record holders.

Owens, also, ran in a choppy, short-stride style that contrasts sharply with Bolt’s huge striding style that powers him through the last 50m of the sprint, leaving his opponents almost immobile as if running through a trough of treacle.

Apparently Bolt takes only 41 strides in the 100m run. A smaller athlete like Tyson Gay (who is Owens’ size) takes 44 strides. The significance of this stride pattern, I believe, is that athletes lose momentum when their feet are on the ground. Bolt’s feet are on the ground less often than his opponents.

The thought occurs to me that someone, sometime, will do a Fosdick and reinvent the way the 100m is run by launching himself into the air like a long jumper from about 20m out from the finishing line.

The SMH quotes Dr Kevin Norton, a professor of exercise science at the University of South Australia, as suggesting that “I am sure the record will go less than 9 seconds one day to a seven-foot (2.133m) man.”

Oxford University’s Dr Andrew Tatem is quoted as suggesting that if trends continue, men will sprint the 100m in 8.098 seconds at the 2156 Olympics. So there is plenty of time and room (in theory) in place for sprinters like Bolt to cut back the record in the foreseeable future.

We will never know if Dr Tatem is right in pointing to around 8.00 seconds as the final mark for men or women to run the 100m in.

But in my opinion, Bolt is the greatest sprinter we’ve seen, for now.