Time to go back to the future 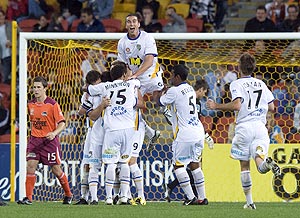 Gold Coast players react after Jason Culina scored in the 59th minute to put the Coast 2-0 up during the 1st round A-League football match between Brisbane Roar and Gold Coast United at Suncorp Stadium in Brisbane, Saturday, Aug. 8, 2009. AAP Image/Dave Hunt

Ain’t it a funny world? Jason Culina arrives home in a blaze of publicity and a couple of mil in the bank as the A-League’s finest advertisement. Then he turns around and says it’s a poorer technical standard than the National Soccer League. Gee, thanks for coming, Jason! Who needs Frank? Bring back Labbo!

The Gold Coast United and Socceroos midfielder, who used to get around for Sydney United and Sydney Olympic between 1996 and 1999 so knows what he’s talking about, told SBS’s The World Game on Thursday: “I can already see that Australian football has made giants strides forward. It is run very professionally and the facilities are excellent. The game has also improved from a tactical and physical perspective.

“Technically there are some good players but when you compare them to those who played in the old NSL, I’d have to say there needs to be some improvement.

“There might be plenty of foreigners but in the old days we had plenty of Aussie players who were just as good or even better.”

Which is wonderful to hear, because for some time now old hands who have seen the best of both “old soccer” and “new football” have been saying pretty much the same thing.

And they haven’t just been talking about the 1980s or 1990s; in their view, even back in the 1960s there was better football being played by newly arrived migrants and part-time footballers who drew big crowds to stadiums such as Lambert Park in Leichhardt, in Sydney’s inner west.

I can’t vouch for that personally as obviously I wasn’t around then but in 2007 when I was doing interviews for my book about Australian football with men such as Rale Rasic, Archie Blue, Atti Abonyi, Ray Baartz and other luminaries of the era, it was a common theme in their reflections of the period.

So it really needs to be called into question how far we’ve come as a football nation.

What Culina’s comments do highlight, and it’s a point I’ve been making for years now, is the continued triumphalism of physicality in the Australian game and the commensurate neglect or outright shunning of flair.

If a player has any of those “European” qualities the usual view of indentured coaches is that he won’t cut it in the rough and tumble of Australian football. He doesn’t get a trial, let alone signed. So he is compelled to leave for overseas, where his skills will be rewarded and honed. To stay at home would be to let them atrophy.

So many times I hear stories like this from agents of or people close to young players trying to break it in the A-League, especially footballers of Asian or African heritage. Some of the A-League coaches won’t have a bar of them – too small, too light, too slender, too fancy – so they’re packing their bags for Europe or South-East Asia, where their gifts are more appreciated.

The A-League was supposed to stem the player drain but it could be argued we’re losing more players than ever before. And we’ll keep on losing them till the words of people like Culina are properly heeded and addressed.