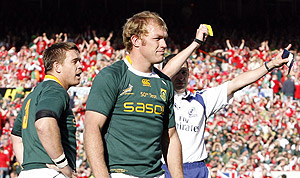 Rugby seems to be hell bent on proving it’s the most disciplined sport on earth. Every time a breach of its increasingly protestant code of conduct occurs, the full wrath of the system is inflicted on the guilty.

In our part of the world, the unbelievably severe punishments dished out to some of the more volatile members of the Kelston first XV raised many eyebrows.

For throwing a few punches, not least at some of the more ill-mannered members of the watching crowd, these boys have had the book thrown at them. The chances are they will be lost to rugby and thus available for mischief elsewhere.

As a result, they lose and so does the game.

But that doesn’t seem to have occurred to those who sat in summary judgement. Then there has been the exotic case of the false blood used to remove English player Tom Williams from the field in a 2009 Heineken Cup match.

This, too, was one which deserved some measure of punishment, but those involved, notably Harlequins Director of Rugby Dean Richards, have also had the book thrown at them. Richards, who readily confessed, should have been appropriately fined and left to get on with his career.

Instead, he was effectively drummed out of the game, being banned, worldwide, for three years and more or less unemployable thereafter.

This was a relatively minor offence.

Dodgy substitutions have become part of rugby’s sub-culture. There was an almost theatrically amusing side to the use of false blood to get a goalkicker on to the field and it should have been treated accordingly.

Instead, in weighed the Rugby Football Union and the IRB sanctimoniously shouting zero tolerance. This came hard on the heels of the now famous Springbok protest at the punishment of Bakkies Botha.

The hamfisted way the South Africans went about their protest deserved a solid slap but the lengths to which the game’s bosses went to exert their authority over the SARU were mindboggling.

The IRB cranked up a full head of judicial steam over this one. The South African Rugby Union was formally served notice of “disciplinary proceedings.”

The matter was referred to the independent Judicial Panel Chairman who duly appointed not just one Judicial Officer but a whole committee assembled from various parts of the world, no doubt at ruinous expense.

These inquisitors duly found the South Africans guilty, dished out monetary fines to anyone and everyone connected with the incident and issued a statement ringing with sanctimony.

It was a demonstration of a game that has begun to take itself much too seriously. Does a rather lame protest like this really bring the whole game of rugby into disrepute?

Surely, by way of contrast, rugby’s cosy relationship with the liquor industry would invoke rather more disrepute than that.

The case for scaling back the punitive approach of the IRB is now becoming urgent. There are circumstances, certainly, in which severe punishments are warranted such as assaults on referees or proven drug abuse.

But to try and make an example of every indiscretion is ludicrous.

Rugby is a game born of indiscretions. If William Webb Ellis had done what he did in full view of today’s IRB, he would have been accused of bringing the game into disrepute.