It was just bad luck that we lost The Ashes 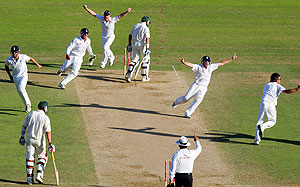 What happened? This is how I began my article the other day on last weekend’s Bledisloe Cup loss by Australia. Since the Ashes, another of the most iconic prizes in Australian sport, were lost at about the same time – a day before if one marks it by the pivotal session, a day after if by the final ball – it seems appropriate to start this article the same way.

Firstly let me say that some of us saw this train wreck coming some time ago, so we had time to prepare for the impact (OK, I will not pretend, it has still been profoundly painful).

For me the realisation came after Lord’s.

My reasoning was as follows.

Firstly, the Cardiff pitch turned out to be almost a clone of Adelaide Oval’s, while Lord’s is arguably Australia’s strongest cricketing fortress. If after such propitious circumstances Australia was still 1-0 down, then the omens were not good given that the venues for the last three tests were not so accommodating.

Secondly, the luck in the first two tests ran strongly England’s way, giving the feeling that it was just going to be one of those series.

I will admit that the rest of the series did not pan out as I had imagined in terms of details – who honestly could have foreseen the carnage at Headingley? – but in a series of wild fluctuations in form, we should not really be surprised by that.

Still, the end result was the one I had the anticipated after Lord’s – a series win to England, and the Ashes surrendered.

In order to avoid any confusion, let me make clear before I proceed that England are not undeserving winners of this series. At a couple of times that turned out to be crucial, they played well and Australia played poorly, and consequently England won two tests.

However this does not change that Australia were by far the statistically dominant team in this series – 8 centuries to 2, 6 of the top 7 run-scorers, the three top wicket-takers, and so on. Yes, these have been trotted out so many times this week that it has become tedious, but they are important.

One reaction to these facts is to dismiss such statistics as irrelevant.

In one sense this is correct, because indeed it is not statistics that determine the results of cricket matches and series.

However there is a good reason why statistics like the above ones – run and wicket aggregates, batting and bowling averages, number of centuries – are kept and have stood the test of time: because they correlate extremely well with results and performance.

Reliable as ever, George Binoy of Cricinfo has done research to illustrate just how statistically unusual this series was: “Before the 2009 Ashes, no team had ever won a Test series after scoring six centuries fewer than their opponents.”

So I contend that one has to take these series statistics as confirming superior Australian performance, and instead ask why this did not translate into retention of the Ashes.

Peter Roebuck and Gideon Haigh are both enamoured of a soundbite from Andrew Strauss: “When we were bad, we were very bad. When we were good we were [just] good enough.”

The “just” is in the Roebuck version only, and it is important. If England were only “just good enough” at Lord’s and The Oval, then how to explain that England won both matches comfortably, and that they had the result in the bag from day 2?

Even the milder Haigh version of Strauss’s admirably modest words does not survive close scrutiny, because it fails to explain that England could be “very bad” for large portions of this series and yet only lose one test match.

Closely related to Strauss’s take on the series is the “England won the key moments” explanation, which has been widely posited this week. In a sense it is axiomatic that this is true.

However my problem with it is as follows: a sporting contest like this consists of myriad “moments”, and rarely is it clear in advance that they are key. Yes, in rare situations, such as John Terry’s penalty in the 2008 Champions League final, it is all too evident that something decisive is about to happen. But generally this is not the case.

Take Stuart Broad’s spell on the afternoon of the second day at The Oval. This turned out to be key. But what if it had rained on days 4 and 5? Then it would not have been key, even though the act would have been exactly the same.

By now it should be obvious where this article is heading, but I won’t arrive there just yet.

Let me first deal with two other theories doing the rounds, both well stated by Tim de Lisle. He has written:

“Hardly anyone noticed the five-for count, which was 4-2 to England. And five-fors do more to win matches, for the simple reason that they take out half the opposition.”

This is poppycock. Australia “won” the five-for count by 5-4 in 2005, but we all know the result of that series. And what wins matches is good bowling from both ends, which sometimes results in Jim Laker taking 19 wickets and Tony Lock only 1, while at other times it results in both bowlers taking less than 5 wickets each.

The other theory enunciated by de Lisle is that “It was the allrounders wot won it”, by which he means the batting of Flintoff, Broad and Swann. It is undeniable that they scored runs, sometimes ones of some significance. But I think it’s hard to sustain an argument that these runs were the main act.

Further, it is even harder to sustain an argument that selection of bowlers who can bat is a recipe for success in test cricket. Australia has always advocated that a test team should consist of a country’s 6 best batsmen its 4 best bowlers.

India and South Africa are now adhering to this prescription, with strong success to show for it.

In South Africa’s case it is after years of frustration from going down the path of choosing bowlers who can bat – remember when with Pat Symcox at 11 they could boast of a batting lineup in which everyone had scored a test century? Now they are playing 4 bowlers without a test century between them, and they are the top dog in test cricket.

And so to the denouement. One of the reasons we are entranced by sport is because sometimes, unpredictably, it defies logic and delivers a result that can only be put down to chance.

England emerged from Cardiff with a draw not just because Monty defied the bowling for 40 minutes, but far more so because over half a day of play – 53 overs to be precise – had been lost due to rain.

In a series with a disappointingly large number of umpiring errors there were, obviously, some where Australia was lucky, but the majority went England’s way, and in particular there was never a run of poor decisions in Australia’s favour like the one that England received in Australia’s second innings at Lord’s.

Strauss won the toss on 4 occasions out of 5, including on all three where it was a real advantage to bat first, viz. Cardiff, Lord’s and – in particular – The Oval.

Just take out the rain at Cardiff and the series is 2-2 with the Ashes retained, even allowing England all its other luck.

The line that luck evens out over a series does not stack up, as I have tried to make clear: when was Australia saved by rain this series? When did Ponting win 4 tosses out of 5?

The truth is that luck can take years to even out, as the fortunes of Mike Hussey show.

If anyone is offended by my conclusion here, just let me say that we Australians rejoiced when Steven Bradbury won a gold medal at the 2002 Olympics, after the three speed skaters ahead of him fell over in the home straight. However we never for a moment pretended that he was anything other than dead lucky.

So it has been for the English cricketers this time – good luck to supporters of the English team, and enjoy it. You were unlucky in the West Indies earlier this year, where England were by far the better team but lost the series.

This time the karma was the other way around.