Barbarians rugby has reached its used by date 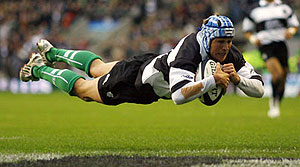 I see that the latest Barbarian money spinner fixture against the All Blacks has been announced for Twickenham on December 5th. But what is the point?

In the past, most teams were content to play in a ‘festival’ manner and give the ball some air to entertain the crowds.

The players were enthused to socialise and play a game with players from opposing teams.

All in all, it was a feel good spectacle for fans and players alike.

There is far too much at stake to consider a loss by playing high risk rugby against effectively a scratch side.

Sure, they will get the odd win. But it is getting more and more unlikely against well-drilled professional sides who, quite rightly, treat the game as Test match.

In which case, why pay good money to watch a predictable game that’s against the core of what the Barbarians are about?

It’s like rolling out the LA Lakers or the Boston Celtics to play the Harlem Globetrotters and being disappointed when the Globetrotters are completely outclassed.

I would be more inclined to watch two composite teams, like he North Vs South tsunami game, play running rugby than one side get strangled out of the match because they will not kick for territory.

This puts the Barbarians between a rock and a hard place: they need to play top tier nations for the cash flow, but need to play lesser nations to be competitive.

The other option is that, as a composite team, they play another composite team who will also abide by the ‘festival’ rugby ethos.

I am a great lover of rugby traditions, but for the Barbarians, I think it’s time to evolve or face consignment to the dustbin of history.