Why September is the best month of the calendar 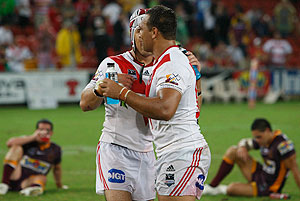 With finals in the two biggest sports in the land taking place, every weekend in September is filled with drama, excitement and tension. It’s the time of the year where legends and infamy are forged.

The question I want to look at today is if the pedigree of some clubs dictate their fortune? Is there DNA in the uniform which affects the outcome.

In the AFL, the top four consists of St Kilda, Geelong, Collingwood and the Western Bulldogs.

Between the four of them, you only have only two Premierships in the last 40 years.

On the flipside, the quartet share plenty of September heartache and tragedy.

Geelong has dominated the last three years and thus far only has one flag to show for their efforts. Should they not win this year, they will match the efforts of the Melbourne Storm who have appeared in the last three Grand Finals, but yet only won one.

Many thought the Cats had smashed the hoodoo when they annihilated Port in the 2007 Grand Final, but all the ghosts returned last year after the defeat to the Hawks.

The biggest underachiever in the NRL would be St George.

It has lost four grand finals since then. More recently, it has lost preliminary finals in 2005 and 2006.

Apart from its purple patch in the early 1980s, you would have to say that Parramatta do not cut the mustard in September.

Their bitter rivals, the Sydney Bulldogs, seem to be the masters of September. Not that they win every year, but they always seem to make a splash when they are there.

In 1998, the Bulldogs finished ninth, which normally wouldn’t be good enough to make the finals except it was a ten team finals that year.

It defeated the Dragons and Bears before coming back from 16 points down against both the Knights and Eels. It ran out of gas in the Grand Final against the Broncos, but it had been an amazing effort just to get there.

The interesting thing with the Bulldogs is that, of the last six times it has won the Grand Final, only on one of those occasion (1984) was it the minor premier.

Someone has to win every year, but in the case of teams such as St Kilda, Western Bulldogs, Parramatta and St George, it seems to be anyone but them.