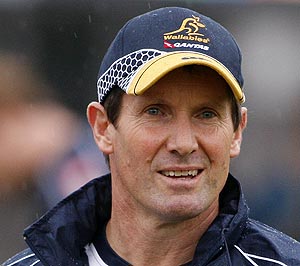 Even though he can’t seem to take a trick in the Tri-Nations, Robbie Deans remains more or less free of the shots being fired at the Wallabies. Those shots are coming with more and more venom, but they still seem to be aimed at the players, which is odd really.

Normally, if there’s a Kiwi within sight any Australian worth his salt will turn his scorn on the poor cousin from the shaky isles rather than have a go at a fellow countryman.

But rugby is a bit different.

The relationship between New Zealand and Australia is a complex one and perhaps a little bit of that history is preserving the skin of our Robbie.

For a very long time, rugby union in Australia was a patient in an international casualty ward and New Zealand was the visiting physician.

Our people would regularly have to bail out the ARU and New Zealand was under regular pressure to come over and play so that union in Australia could be seen to be competing with league.

By and large, the Aussies were the All Blacks’ whipping boy.

From the first test ever played in 1903, before 30,000 fascinated and at times mystified spectators at the Sydney Cricket Ground, the pattern was established.

The All Blacks pounded away up the centre in forward rushes, monopolising possession, while the Australians looked for occasional opportunities to attack through their backs.

And New Zealand would win.

For most of the 20th century, rugby union in Australia was the skinny guy on the beach who got sand kicked in his face. Everywhere on rugby’s Australian horizon there was the hulking bully – rugby league.

New Zealand teams, more often than they might have wished, crossed the Tasman to fly the union flag and assistance by way of coaches and tactical advisers would often head for Australia to help the game along.

Professionalism changed much of that, of course, and so did the nasty fracas over the hosting of the 2003 World Cup in which neither of the national unions came up smelling of roses.

In some ways Australia-New Zealand rugby relations have mirrored the wider relationship.

People still go round wearing those T-shirts with the mean-minded message: “I support New Zealand and any team that’s playing Australia”.

And they mean it.

New Zealand isn’t of much consequence across the Tasman although one suspects that it makes Australians feel more substantial knowing they can beat up on New Zealand whenever they want.

Except in rugby, where it’s rather more difficult.

Robbie Deans was, in a sense, a final, if rather begrudging gift from New Zealand rugby to Australia.

But how long will it be before they turn on him as the cause of their Test match drought?