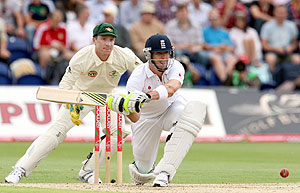 To see Adil Rashid, Ravi Bopara and Owais Shah represent England in the first one-day international (ODI) against Australia at The Oval last Friday is the inspiration behind this post.

All three have Indo – Pak origins although only Shah (6 Tests and 61 ODIs for England) was born in Karachi, Pakistan.

The current Ashes series had a strong South African connection. As many as four in the England Test team — Andrew Strauss, Kevin Pietersen, Matt Price and the debut centurion Ian Trott — were born in South Africa.

Here is a list of cricketers born outside UK and Ireland who have represented England at Test level. (Those born in Scotland, Wales and Ireland are not included in this list, for example Wales-born reverse-swing quickie Simon Jones).

Sixteen were born in India, 11 in West Indies, 10 in South Africa and nine in Australia.

England triumphed by an innings, and retaining the same team for the next Test in Auckland, won by 168 runs. Is there a message here somewhere?

When will Australia include an Asian in their Test line-up? Pakistan-born Usman Khawaja may become the first Muslim to represent Australia in cricket. In 11 first-class matches for NSW the 22-year-old has hit 651 runs at 40.68 with a highest score of 172 not out.

And India-born all-rounder Lisa Sthalekar, 30, has played seven Tests for Australian women, averaging 33.83 with the bat (top-score an unbeaten 120) and 20.23 when bowling.