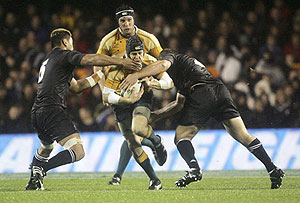 Stephen Larkham ensured that newly promoted Ricoh Rams got off to a winning start in their first game of the season, downing fellow promotees Honda Heat 23-15 last Saturday.

Larkham was a strategic 30th minute replacement by Ricoh coach Todd Louden, and won the MVP award for pulling off a try saving tackle and scoring the opening try of the game off a charge down from a clearing kick.

More notable, perhaps, was a star-making performance from the Heat’s young halfback, Yang Young Hun. Fantastic to see the South Korean international excel at this level.

In the traditional Top League opener that pits the finalists of the previous year’s Microsoft Cup against each other, Sanyo topped the reigning champions 24-18.

Brown, now in his sixth season with Sanyo, is without a doubt the most intense competitor in Japanese rugby, and you can expect him to chase the Top League title this season like Ahab chased the white whale.

Perennial runners-up throughout the history of Japanese company rugby, Sanyo were well on their way to dominating the Top League last season before Brown’s horrendous injury. While Brown made a quicker than expected comeback, the Wild Knights never recovered from the Tony Brown derailment.

Friday night’s opener was criticised, however, for the poor rugby on offer. Daily Yomiuri Sportswriter, Rich Freeman, lamented the number of kicking duels throughout the opening weekend, and numerous coaches complained about the breakdown.

These complaints are not so surprising since Japanese rugby opinion leans heavily towards whatever the status quo is in the Southern Hemisphere. The more worrying issue was the state of the Chichibunomiya pitch.

Despite what people think from afar, the Japanese infrastructure is not up to scratch for hosting a Rugby World Cup. This may change come 2019, but the state of the Bledisloe Cup pitch has to be a concern.

It’s not that uncommon in Japan to see divot holes, worn areas, even potholes in championship games. The same venue that will host the Bledisloe Test (National Olympic Stadium) was filled in with sand in this year’s All Japan Championship final.

Lastly, NRL convert Fraser Anderson made his debut on the wing for Kobe Steelers as they fought back from 24-12 to notch a draw with the George Gregan/Eddie Jones Suntory Sungoliath.

Gregan played his customary 40 minutes of rugby and appeared to make no effort that I could see.