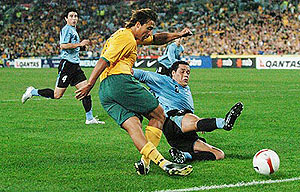 Waiting for Lucas Neill to join a new club has felt like waiting for Guns N’ Roses to release the Chinese Democracy album – the only difference being Axl Rose finally managed to put us all out of collective misery and release the bloody thing.

Three months after he walked out of West Ham a free agent, Neill gave the impression he was on his way to bigger and better things and asked for forbearance from fans and the national coach as he prepared the “masterpiece” of his professional career.

But is providing injury cover for Phil Neville at Everton what anyone really expected? And for about the same money he was being offered to stay in London?

Was it worth the wait?

Not in my book. It’s a massive disappointment. Especially when Neill had the opportunity years ago to join the biggest club on Merseyside, Liverpool, and turned them down. But at least, and at long last, it appears he’s going somewhere and can get back to doing what’s really important: representing his country as captain and preparing his team for the World Cup.

Hopefully, too, I can shut up about it.

This saga went on way too long and was a blight on Australian football, far more damaging than anything Tim Cahill allegedly got up to on the turps in Kings Cross. What annoyed me most about it was the almost complete suspension of critical analysis in the mainstream press of Neill’s dangerous poker game. The only time he ever got decent column inches – and spuriously – was when Michael McGurk got shot.

Our old mate Slippery Jim will no doubt delight in the rumoured return of Nicky Carle to Australia as a guest player for the Newcastle Jets (what a joke, so-called greatest Australian footballer ever, you’re an arsehat, Fink, yada yada yada) but there doesn’t seem to be a lot in the story and knowing Carle’s ambition to make the World Cup squad I don’t think he’d countenance it for a minute. I’m sure he’s unimpressed the story’s been played up in Australia and will feel rightfully embarrassed it’s got back to Palace when he’s trying to make all the right noises.

The person who really should be worrying about his future is Carle’s bete noire, Neil Warnock, who presided over a 4-0 humiliation by Scunthorpe – the mighty Scunthorpe – over the weekend, with Carle unused in favour of the Frenchman Alassane N’Diaye.

That leaves Palace in 20th position after six matches in a 24-team league, 12 points behind league leaders West Bromwich Albion.

If I was a betting man I’d put my money on Carle over Warnock and we all know what a new manager might do for Carle if he doesn’t get a move elsewhere in the meantime.

Given the tenuous position he holds in Verbeek’s World Cup plans, you can rest assured Carle won’t be calling any prospective new club’s bluff like his national captain. Say what you like about him, but Carle’s still a footballer that plays for all the right reasons.