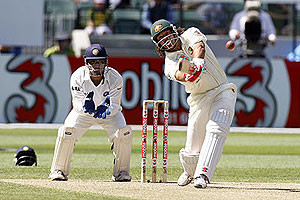 Am I the only person writing on Test cricket these days? After seven One-Day Internationals in England, the ICC Champions Trophy starts the South Africa today, then the Airtel Champions Twenty20 in India starts on October 8, followed by more Fifty50 ODIs between Australia and India in India.

Test matches will recommence in November.

But to keep the fires of Test cricket burning, here is the third post on the series of overseas-born Test cricketers. This time the focus is on Australian Test players.

Six of Australia’s Test team which played against England in the inaugural Test in Melbourne in March 1877 were born overseas.

They were: Charles Bannerman, John Hodges, Tom Kendall and William Midwinter in England, Tom Horan in Ireland and Bransby Cooper in India.

Since then, fourteen more foreign-born cricketers have represented Australia in Test cricket.

Below are listed twenty Australian Test cricketers who were born overseas.

Have I missed anyone out? Over to you, Roarers!

Note:
Charles Bannerman played the first ball in Test cricket on 15 March 1877, scored the first run (off the second ball) and went on to record the first Test century.

His domination in that innings (165 out of Australia’s total of 245, which works out at 67.35 percent) remains a Test record, even after 133 years! Beware the Ides of March, the England team must have commented.

Archie Jackson, a contemporary of Don Bradman, was an elegant batsman but died aged 23. While lying in hospital on what was to be his death-bed he got married.

Knowledgeable critics opined that Jackson was as talented as Bradman and as elegant as Vic Trumper. What a tragedy that he died so young!