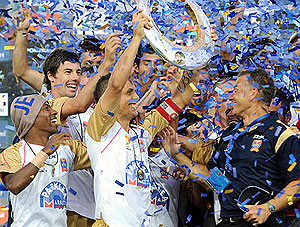 Do you go to A-League matches? Ever heard of ‘Hatamoto?’ No, it’s not a Manga cartoon or some new form of Japanese art. But maybe you should know about them, considering that you may be filmed or observed by their employees.

Hatamoto has been engaged for some time now by the FFA to provide “in house security management support.”

Shadowy Hatamoto staff are present amongst fans to collect information. They are now known to fans as the “cargo pants wearing, black polo sporting posse.”

The names of the people running Hatamoto are on the website for all to see.

It wasn’t difficult for enterprising Melbourne fans to find them on Facebook and match their profile photos with the aforementioned cargo wearing gentleman (so much for ‘security’).

They are starting to get known, not only in the grounds, but also in places like pubs, or in pre-game marches. Some fans think that they may build files about some people.

Apparently one fan was startled when one of these Hatamoto characters addressed him by his first name, considering he had never met this person before.

In Adelaide last Friday, one fan caught them on his mobile phone filming Melbourne supporters watching the match.

Scrolling down the blurb in the Hatamoto website shows probably why this has been done: “We understand the complexity and scope of such events can provide all facets of the security management required including assisting our clients to minimise the impact that poor media exposure can have on their brand and consequently the event”.

I can understand the FFA point of view, to some extent.

Football has had a pretty bad rap in the past. Also, the fact that many in the media either don’t care about football or are actively working for competing codes makes the ‘image’ of football in Australia a crucial part of whether the game succeeds.

And I want it to succeed.

However, I do wonder whether the FFA is going about it the wrong way.

The FFA can’t have their cake and eat it too. If they want colour, movement and lots of noise picked up by Foxtel mikes, they have to live with an autonomous group which is outside their control.

More worryingly, engaging these sort of ‘terrorist consultants’ betray a certain lack of knowledge about football.

One way that football can create a unique ‘brand,’ as they call it, is through the way the sport is supported. If you force football support to become a carbon copy of other codes, it will lose a lot of its shine and attractiveness.

Instead of engaging something like Hatamoto, and have these individuals in the shadows at matches, it would be better if the FFA actively engaged with fans and started a dialogue.

It is not guaranteed that everything will be always hunky dory, as inevitably in any crowd there will be some who are determined to create mischief. But I think it will reduce the amount of behaviour that is seen as problematic if active fans don’t go into the ground already thinking that they are seen as a problem.