Time for some A-League masala 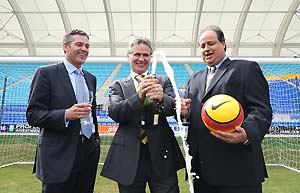 Is it Let’s Bag Jesse Fink Week or something? First there was Les Murray at The World Game gently chiding me for defending Emmanuel Adebayor. Now Davidde Corran at The Roar has let out a very public groan at another one of my impassioned open letters to Pim Verbeek to play Richard Porta.

I’m a sensitive little flower, so please be kind, readers.

But I’m going to lob another verbal hand grenade in the direction of the FFA this week and tell them to get their bloody act together to counter these player raids by Asian clubs. They need to do something, which is better than what they’re currently doing, which is nothing.

Followers of this column will know I’ve written extensively on the subject, so this is not the place rehash all the arguments for why Australian football needs to not only be vigilant but strong in the face of such relentless poaching.

You well know the wheres and whys.

What is new, however, is where the reported interest in Asia is coming from. India is slowly eating away at Australian domestic cricket and it threatens to do the same with domestic football.

The premier Indian domestic football competition, the I-League, whose new season kicks off in October, might be regarded as a joke now, and for all intents and purposes it is.

But FIFA and the AFC have a strong interest in the long-term growth of the game on the subcontinent, the All India Football Federation and I-League are being overhauled in key administrative positions, and the sheer economic windfall that companies stand to make should the game take off means there will never be any shortage of interested parties wanting to make the sport work.

It might take 20 years. It might take 50. But India is going to be a power in football and a smart A-League club should be making connections now – if only ceremonial – with those teams that will emerge as Asian superclubs in the future: Mohun Bagan, Mahindra United, Pune, Dempo and Churchill Brothers.

The prospects of players going to Indian clubs in the short term is minimal, and will likely begin and end with state league players unable to land A-League contracts and wanting a bit of an adventure.

But a shrewd chief executive should see the benefit of looking at someone such as Baichung Bhutia, India’s most capped player who is coming to the end of his career, Nehru Cup hero Subrata Pal or new wonderboy Sunil Chhetri, who was knocked back for a UK work visa and so couldn’t join Queens Park Rangers, who wanted him on a three-year deal.

He’s currently cooling his heels at Dempo in Goa and would undoubtedly relish the prospect of Asian Champions League football with an A-League club. (Dempo was defeated in the playoff for an ACL place by UAE club Al-Sharjah in February.)

A big market. Big exposure. Big commercial prospects. With the possibility of a decent footballer thrown in the mix.

It might all seem a bit fanciful and ambitious, but that’s the whole point of running a business, isn’t it? If the A-League can gain even just a small foothold in Indian football, it’s making a very wise investment in its own future.