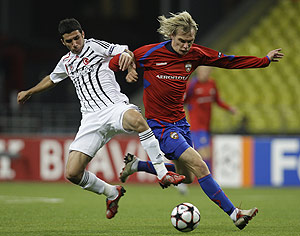 While the Australia 2018-2022 bid might have taken some succour from the withdrawal of Mexico from the race for hosting the World Cup, there looms a significant event on the horizon that will pose a whole new challenge: the official launch of the Russia 2018-2022 bid by the Russian Football Union before the October 10 Russia Vs Germany World Cup qualifier at the 80,000-capacity Luzhniki Stadium in Moscow.

On the day there will also be a conveniently arranged tribute match to Lev Yashin, featuring veterans from Germany and Russia including Lothar Matthäus.

Something to warm the cockles of Franz Beckenbauer’s heart.

The World Cup-winning captain, of course, is a member of FIFA’s executive committee, the body that decides who gets what.

Significantly, the Russians have enlisted the help of Andreas Herren, formerly FIFA’s director of communications, who worked for years as Sepp Blatter’s PR flack/apologist, and US-based marketing group Helios Partners, which worked with the Russians to secure a successful bid for the 2014 Winter Olympics for the city of Sochi on the Black Sea.

The choice of Helios was approved by Russian prime minister and Clayton’s dictator Vladimir Putin.

Combine this with the world’s most wanted coach in Russia manager Guus Hiddink, a national team on the rise (Russia is placed sixth in the FIFA rankings, a remarkable turnaround from 1998, when it was ranked #40), a Euro 2008 semi-final finish, a domestic league that has produced a UEFA Cup champion in Zenit St Petersburg, and an economy that released a clutch of dodgy oil and gas oligarchs into the European football ownership circuit and you have a formidable opponent.

In my opinion, Russia is the real sleeper candidate for 2018 and is advantaged more than anything else by history: extraordinarily the world’s biggest country has never hosted a World Cup.

Significantly, its chief rivals from Europe – Spain and England – have.

With six stadia already suitable as approved World Cup venues, there are plans to build nine more and name a total of 14 host cities. An impressive spread. Government funding has already been secured.

Australia 2018, by contrast, is a study in bureaucratic dithering and only five stadia meet FIFA requirements. A minimum of 12 must be nominated by December.

Most of the host cities will be on the eastern seaboard – concentrated in NSW and Victoria – with doubts about whether any games will take place in South Australia and Western Australia at all, subject to funding for stadium rebuilding/expansion.

More and more the Australia 2018-2022 bid looks quixotic, a view I’ve held from the beginning, while conceding that we are an outside chance for 2022.

Frank Lowy’s hubris and mortality is compelling it forward, of that I believe there is little doubt, and he deserves a World Cup for what he has given football in Australia, but right now I’d rather see all that money spent in shoring up the crumbling foundations of the A-League.

A World Cup might be a nice way to remember Lowy when he’s gone, but I’d rather still have an A-League in nine years time.