Time for Australia and Indonesia to unite 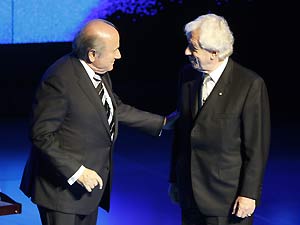 Over at Goal.com, my mate John Duerden has a fantastic piece up suggesting Australia and Indonesia combine their World Cup bids to have a shot at either 2018 or 2022.

With the Rio Olympics going to Brazil and the chastened Americans firming as a favourite for 2022 with 2018 inevitably going to Europe, the chances of Australia getting anything at all are looking decidedly gloomier.

Something the Indonesian bid has always been. It hasn’t stood a chance in hell.

So, why not do as Duerden suggests and make the most of this bad situation and get a little creative?

As readers of this column and my work at The World Game and ESPN STAR Sports well know, I have long been an advocate of closer Indonesia-Australia ties, so what Duerden is proposing warms the cockles of my heart. When Australia joined the Asian Football Confederation, one of the mantras of FFA chairman Frank Lowy was “football diplomacy” – that football could achieve things in our region that politics and trade could not.

I believed him. It was one of the main themes of a book I wrote back in 2007 – how Australia was using football to get closer to Asia; that through football we were slowly coming to realise what were really were and had been for some time: an Asian football nation.

But “football diplomacy” apropos Asia seems to be a low priority at the moment. All the buttering up is being done in the halls of FIFA, with Lowy angling to get his World Cup.

In my view it’s the wrong approach. If Lowy really wants to bag a World Cup, he’d be better off doing away with trying to charm Jack Warner and cosying up to Indonesia, one of the most important markets for football in the world.

As Duerden writes in his story, “Indonesia has the population and the passion… Australia has the knowhow.”

Combined it would be a formidable bid, covering all the important bases and spread the tournament across an impressive geographical area. Australia and Indonesia boast between them three of the biggest
stadiums in the world.

More importantly, though, it would be uniting two antithetical cultures: Christian and Muslim, West and East, and that would be a considerable advantage to the bid. FIFA likes to think of itself as an organisation that promotes peace and fraternity through football, so what better opportunity than Indonesia-Australia 2022?

Obviously the massive disadvantage is transportation – Indonesia is not up to par by any measure – but cheap labour could solve that problem thriftily and inexpensively by the construction of new roads and rail networks in the major cities.

Security issues, too, would be a concern but what better incentive to finally smash Jemaah Islamiyah than the promise of a World Cup on Indonesian soil?

The terrorists’ cause would actually be ill served if they tried to do anything untoward during a World Cup. If there’s one thing Indonesians love more than anything else it’s football.