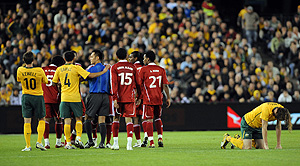 I can’t decide whether Oman coach Claude Le Roy looks like Tom Petty or an aged Joni Mitchell, but there’s no doubting he’s one mightily pissed off dude. And for good reason. Not the fact his valiant Omanis fell victim to another one of Tim Cahill’s get-out-of-jail goals, but because Socceroos team manager Gary Moretti “insulted” him at half-time in Wednesday’s Asian Cup qualifier in Melbourne.

Le Roy wasn’t mincing his words in the post-match presser: “In 30 years I am a coach, I never receive an insult from anybody, but the behaviour of this man at half-time is not of the quality of this country, this team and this staff.

“I am not going to repeat [what Moretti said]. I just wanted to tell you that it’s not at the level of a country like Australia.

“We are not cheaters. I am not liking it when the players [ask for medical assistance] on the field – but it happens only two times in the first half. We were not going to cheat, not to lose time or waste time. I never ask that of my players.”

From the tenor of the comments it’s clear what Le Roy was suggesting Moretti had said – so what the hell was the Australian official doing?

More importantly, why on earth does he need to be on the sideline?

The bloke’s a glorified booker of hotel rooms, for god’s sake. Is he on the technical staff? Does his input affect the course of proceedings?

Or is he like Phil Wolanski, the team’s head of delegation or whatever they’re calling Frank Lowy’s eldest son’s best mate these days, and there presumably just because it makes him look important?

If Moretti can’t keep his mouth shut, he has no business being on the bench. He certainly does not have the remit to be mouthing off to the coach of the Oman national football team. What an embarrassment.

Especially at a time when this country critically needs the support of Arab nations in our quest to bring the Asian Cup and World Cup to our shores.

We have enough image problems overseas without his impertinent observations.

What’s more breathtaking about Le Roy’s allegation, however, is that the same charge of cheating could easily be made against the Socceroos, two members of which Le Roy amusingly (and correctly, in my view) disparaged as “assistant referees” for their habit of persistently whining and hectoring.

There was Tim Cahill complaining to the referee about shirt-pulling during a corner kick when replays showed him literally shoving an Omani to the turf.

Then there was Harry Kewell appealing for a corner when it was clear he had had the last touch.

And how the whole result could have been different had that penalty claim gone against Scott Chipperfield late in the second half when he brought down an Omani without touching the ball. Instead it didn’t and those supposedly cheating Omanis took it with good grace.

The Australians were very, very lucky to get the result. They might not be so lucky with voting for the Asian and World Cups, though, if they continue behaving with such classlessness and tactlessness.