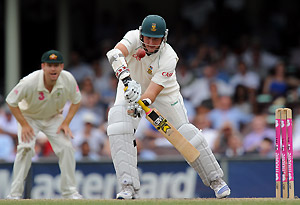 Injured South African captain Graeme Smith in action during the second innings on day five of their Third Test against Australia at the SCG in Sydney, Wednesday, Jan. 7, 2009. Smith retired hurt from the first innings with a broken finger. AAP Image/Paul Miller

The spectre of international cricket schedules has raised its ugly head again in recent weeks, not just because of, but certainly highlighted by, Australia’s suddenly chronic injury toll.

Such has been the regularity of Australian cricketers departing from and arriving in India in the last two weeks, Qantas might have to put on extra flights.

The height of this inconceivable situation (hopefully) is that of Moises Henriques.

The young NSW all-rounder had just returned to Sydney from the Champions League Twenty20 tournament in India, had enjoyed a day at home, and was just getting around to unpacking when he got the call-up to replace the injured James Hopes.

Henriques’ return to India would barely have lasted a week. In his second game, Henriques tweaked his hamstring, and was promptly put back on the plane. Considering he was replacing a player who had also pinged a hammy, there really wasn’t a more ironic way to end Henriques’ series.

The logical link to all these injuries has been quickly established, and this is where the ludicrous nature of the current international cricket schedule fits in.

40 ODIs in a calendar year doesn’t necessarily sound that strenuous on its own, but when you factor in that these games have been played all over Australia, South Africa, the UAE, England, Scotland and India, and the associated travel that comes with the one-day game, then you start to see the problem.

Add to that that Australia has already used well in excess of 30 players in ODIs this year, and remember too that there’s only 25 players on Cricket Australia contracts.

Of course, it’s not just Australia feeling the pinch of injuries.

India have had Zaheer Khan out for an extended period, have only just got Yuvraj Singh back in this current series, and both Virender Sehwag and Guatam Gambhir remain game-to-game prospects.

South Africa have lost captain Graeme Smith for chunks of this year, and likewise England with Paul Collingwood. Collingwood surprised plenty when he requested some time off in the middle of the one-day series that followed The Ashes, and then also wanted to pull out of the Champions League Twenty20, only to have his franchise, the Delhi Daredevils, declare him a required player. In the end, he missed the CLT20 because of injury anyway.

And to perhaps cap off how scheduling and injuries are making players rethink their priorities, this year we’ve also seen the first two instances of what I’ve dubbed the “modern retirement”, with England’s Andrew Flintoff and New Zealand’s Jacob Oram both retiring from Test cricket to focus on limited overs internationals and, undoubtedly, lucrative Twenty20 tournaments.

So how many more injuries will we have to see before the schedule is seriously rethought? Sadly, it’s probably plenty more.

Despite the International Cricket Council swearing they have player welfare and safety in mind, they still allow the scheduling of as much cricket as there are days in the calendar.

What’s worse, India, Australia, England and South Africa are looking to set up their own schedule-within-a-schedule, whereby these four major nations will host at least one of their money-spinning counterparts once every year in a four year cycle.

Apart from maximising revenue for these countries, and ensuring fewer unpopular series against lesser opposition, this plan will essentially create a quasi-tier setup within Test cricket, which I for one am dead against.

If the ICC was serious about cricket, and not just pandering to broadcasters, they wouldn’t even consider allowing this move.

And herein lies the crux the cricket scheduling problem: broadcast rights, and the millions they’re worth to the host nations. Simply, nations prefer to host opposition who can draw big crowds and massive television rights. Oh, did you think international cricket was still a sport?

But I can see a possible answer.

Admittedly, I don’t like its chances, because I can’t see cricket superpowers relinquishing their main revenue source.

In my mind, just as they retain the rights for World Cups, and Champions Trophy series, the ICC should retain all television broadcast rights to international cricket. Tests, ODIs, pointless T20Is, the lot.

Host and opposition countries can still take a large percentage of the revenue gained from the sale of these broadcast rights, but all in all, the ICC is the selling agent. Any prospective broadcasters should direct their enquires to the ICC, PO Box 1, Dubai (might not be their actual address).

This way, the ICC suddenly becomes the central controlling point for all international cricket, and not just the toothless tiger they are currently.

The host nations can still put forward their schedule requests as currently happens, but ultimately, the ICC determines how much international cricket is played. Or more importantly, how much isn’t played.

This radical move is the only way I can see some control and credibility brought back to cricket scheduling. I know this means that the nations lose their power and bargaining tool over the ICC, but in the end, does the ICC run the game or do the nations?

This is the ICC’s opportunity to wrest back control. And if it really has the players’ welfare and safety in mind, it has to look at this problem urgently, or the burnout and injury tolls will only climb.