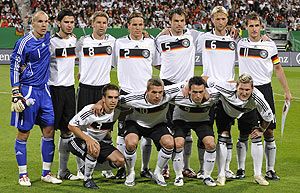 I can’t pretend to have known much about Robert Enke, the German footballer who threw himself in front of a train this week, but I was more than familiar with the emotional architecture of his story, having written a piece on depression among sportspeople a few years ago for Inside Sport magazine.

In the sporting world, as everywhere, it is rampant. But sport itself presents unique challenges for those working to destigmatise mental illness.

That’s because so many sportspeople, especially in professional ball sports, have to function in macho and ultra-competitive environments where showing any amount of frailty, timidity or weakness can get you dropped from the team or ostracised in the dressing-room.

And so they do, from their teammates, their coaches, often their families, suffering in silence until one day you or I pick up the newspaper or log on to the internet and read that this person whose existence we took for granted is gone.

That’s what happened with Enke.

He kept it to himself until such time as he could take it no more and left behind a letter explaining his torment. His Germany and Hannover 96 teammates are in shock, having known nothing of his troubles. The Nationalmannschaft’s next match, a friendly against Chile this weekend, has been cancelled.

Enke’s death comes only weeks after Paul Williams, the former SBS football commentator, also took his own life. As my SBS colleague Les Murray wrote with great courage, not sanitising the tragedy for anybody, Williams died “in a dark place and in a dark state of sinister despondency, shivering in the ultimate cold of hopelessness… harangued by demons against whom he had long fought but by whom, in the end, he was out-manoeuvred.

“It was, as so often happens in football, a victory for senseless injustice.”

Senseless injustice might be acceptable on a football field, because it’s only a game. In any case one cannot prevent the movement or trajectory of every pass and ensure the result we want. But senseless injustice, when it comes to the ultimate contest of living and dying, is something we should never accept.

Sportspeople need to know they can reach out for help without retribution or judgment. Most can’t, or feel they can’t, either when they’re mid-career or retired, and so we keep on hearing stories like Enke’s and Williams’s that shock us to their core for their needlessness and waste.

Mental illness has destroyed too many lives for us to sit by and let the carnage continue. We all need to do more for those among us who are struggling, particularly men – be they mates, brothers, sons, fathers or whoever, whether they play sport or not. Getting another beer into them and asking them to cheer up isn’t the support they need.

Enke’s death was needless. But if one person is saved by hearing his story and choosing to get help, it wasn’t in vain.

May he rest in peace.