Keep Guus away from the Socceroos 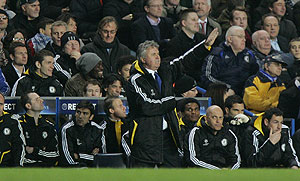 Now I’ve got all the time in the world for Craig Foster, a professional and personal mate. We’ve even talked about working together on a project. But he’s being unusually provocative in calling for Guus Hiddink to replace Pim Verbeek as coach of Australia at the World Cup.

While I have the utmost respect for what Hiddink has achieved as a coach and what he did for Australia in 2005 and 2006, it isVerbeek who has earned the right to lead Australia at the World Cup and it would be an outrage if he were demoted.

I say that not as someone who especially likes the way Verbeek’s teams play, because I do not, nor the players he picks, because again I do not, but he is entitled to prove to us all that his vision is the right one. He can only do that by leading us to success at South Africa 2010 without having to worry about looking over his shoulder for Hiddink or anyone.

Hiddink has failed with Russia and failed badly. His famous luck ran out this week against Slovenia but in truth it should have happened long ago. The Dutchman is a maverick, a bluffer, someone who has the uncanny knack of taking the right opportunity at the right time and demanding heavy remuneration for it. He is unquestionably good at his job and a brilliant motivator but so are many others in his game. They just don’t have his aura or his agent.

Conspiracy theorists might point out that the men who appointed Hiddink to the Socceroos in 2005, Frank Lowy and Phil Wolanski, are still running the show at Football Federation Australia and could well be tempted with a trip down memory lane. That might be the case. But Verbeek and his wife are close personal friends of Wolanski, so there is as much chance of Wolanski stabbing Verbeek in the back as there is me having dinner with Graham Arnold. It ain’t going to happen.

South Africa 2010 is Verbeek’s arrival as a coach. The moment he’s been waiting for his entire life. He’s made other people, Hiddink and Dick Advocaat among them, look good and now it’s his turn for some time in the sun.

To bring in Hiddink now over the top of Verbeek would be the biggest slight that could ever be perpetrated on the man. Foster contends, “I’d be surprised if Verbeek had a massive problem with it.” But the truth is he’d be livid.

Where I think Fozz does have it right, though, is his assessment of Hiddink’s discipline of players and man-management style as diametrically opposed to Verbeek’s, or the “polar opposite”. That is: not getting close to any of the players, making certain players know they don’t have a mortgage on their positions, not brooking any crap from anyone.

In my opinion, Australia could do with a little more of the Hiddink approach and less of Verbeek’s comparative softness. He’s given his players way too much licence.

But for me, Verbeek should stay. No questions.

If any country is to make a beeline for Hiddink’s services it should be South Africa, which must be ruing its decision to reappoint Carlos Alberto Parreira. Hiddink would have been perfect for Bafana Bafana.

Still, there’s a long time between now and June. Anything can happen. As we saw this week in Slovenia. When Hiddink says, as he did following the game in Maribor, that “the question of whether I will continue to UEFA Euro 2012 will require some time for thought” and “we’ll talk about the future at a later stage”, you just know he’s got another trick up his sleeve.

But who’s he fooling now?