Adelaide may hold the answers to crowd concerns 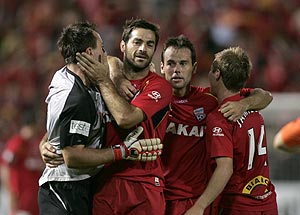 There is a peculiar occurrence happening in Adelaide – one that is defying the A-League trend. Despite the Reds struggling to recapture the form that took them to last season’s Grand Final, Adelaide’s crowd average has risen ever so slightly.

This time last year Adelaide was sitting pretty in the A-League with big home wins against Sydney and Wellington – a 6-1 thumping – before they jetted off to Japan to compete in the World Club Cup and returned home to continue their charge to the Grand Final.

This season the Reds are in shambles.

The public has turned on Aurelio Vidmar. Their one-dimensionality and struggle to score – two goals from the last four games – has frustration growing.

Unless they find some goal scoring form quickly, there is a distinct possibility they could miss out on the finals.

Yet, despite this and the ongoing question marks over the club’s ownership, crowds have increased with an average, thus far, of 11,758.

The 9,578 crowd who witnessed their lucky escape to the Gold Coast, on a wet night following a miserable week of weather in Adelaide, was the first crowd under the 10,000 mark all season, and dented the season average that was hovering above 12,000.

The fact that it has increased – ever so slightly – up until this point is remarkable considering the club turmoil, especially in a season in which A-League crowds are down across the country – aside from the resurgent Perth Glory.

If any fanbase had reason to turn their back on a team it was Adelaide fans. Remember the ‘pissant’ comment? Vidmar, with his rants, certainly hasn’t made it easy for the club to portray a positive representation of itself.

So, how is the club retaining, and seemingly growing, their crowd base in this environment?

Adelaide United could well be showing the ingredients necessary for A-League franchises to overcome their crowd concerns.

For one, the team enjoys a large media profile in Adelaide.

With the NRL and Union receiving little media attention in a state without professional representation in either code, it’s a fact that the so-called fringe sports receive more mainstream coverage in Adelaide.

Away from the AFL season, it’s typical for United to feature prominently in the back pages of the local newspaper, The Advertiser. When former coach John Kosmina criticised Aurelio Vidmar, it was the lead sports story on the back page of the paper last Thursday. On Sunday, it was Vidmar on the back page as the pressure builds on last year’s coach of the year.

The club has worked hard to build a relationship with media outlets in the state, and constant ticket giveaways and competitions not only help increase the number of people going to games, it also builds awareness of the club and its fixtures.

There has been another key factor to the healthy crowds.

While Brisbane was lumped with the unpopular Saturday afternoon time-slot for many of its early season matches, Adelaide has been blessed with eleven Friday night home-fixtures; a popular timeslot that avoids weekend social event congestion.

It’s an incredibly favourable draw for the club, and it has undoubtedly helped with crowds this season, despite Adelaide having some of the highest ticket prices for individual matches across the league.

In addition, the Adelaide United brand has gained significant traction in South Australia, and they stand side-by-side with the Crows, Power, 36ers and Thunderbirds as recognisable Adelaide representatives.

Their fanbase are certainly a loyal bunch, particularly demonstrating so this season, with a Facebook group with close to five-thousand members highlighting the sense of community building around the club, not to mention using such outlets as a highly effective means of promoting upcoming matches.

Yes, Adelaide United did have a season up on its A-League rivals – aside from Perth Glory – debuting in the old NSL; they enjoyed a phenomenal run in the Asian Champions League final that galvanised Adelaide; and, along with Melbourne Victory, they are one of the most successful A-League clubs.

The aforementioned has all been fuelled by healthy communtiy programs that are engaging with locals.

The ability to sustain crowds during a period of such on and off field turmoil points at the importance of such factors in the bigger picture scheme of a franchise’s development.

So, an increased media profile, brand recognition, community engagement, favourable fixtures and a dose of on-field success has ensured a stable crowd.

No great surprise in those factors contributing to a clubs success, is there? For all the doom and gloom that has surrounded crowd figures this season, Adelaide should be used as the example that proves how fundamental these factors are to sustaining and building a fanbase, despite Vidmar’s efforts to undermine them.