Selecting the best Boks team of the decade 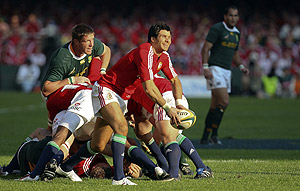 After Hoy’s and Stash’s team lineups, I thought it appropriate to chuck a Tri-Nations together with the addition of a Boks team. The Boks in this period were on the decline after ’98 and ran through a very dark period before finding the light around ’04.

I have also, for interest, added the playing era and some bio stats

15 Percy Montgomery ’97-’08 : 6’1 93kg
Often described as more flash than substance, South Africa’s record point scorer left for Wales and returned a matured player. Gone were the mistakes that punctuated his play and in place we got faultless positional play and a prolific boot. Despite not being known for it, he could also score tries, picking up 25 along the way

14 Breyton Paulse ’99-’07: 5’10, 80kg
The Shane Williams of another age. Breyton was born with both rocket fuel and a twinkle in his boots. I used to love the way he would in-and-out people on a regular basis.

13 Jaque Fourie ’03- : 6’2, 93kg
Maybe a contentious choice but Fourie time and time again appears in the right place at the right time to score or break the line. Excellent on defence, too.

11 Bryan Habana ’04- : 5’1, 94kg
There isn’t much more to say about Bryan, he probably deserves more credit as the current game-plan of the Boks doesn’t provide him much opportunity to shine. I look forward to him getting more ball with the Stormers this year.

10 Henry Honiball ’93-’99 : 6’2, 84kg
Lem, as he was known, was probably the best flyhalf I recall remember us having. Devastating on defence, the 10 channel became tighter than a warthogs backside. But it was the way he took the ball to the line that earned him the nickname, meaning knife, for the way he cut through defenses. Not a bad kicker, either.

9 Joost van der Westhuizen ’93-’03 : 6’1, 88kg
Really tough call between Joost and Fourie, as both are fantastic players, but in the end I plumbed for the nostalgic choice.

8 Gary Teichman ’93-’99 : 6’4, 100kg
Captain of Mallet’s 17 consecutive wins streak team, arguably the greatest Bok team of all time for the way they didn’t just beat teams but dismantled them. More a toiler than the flashier Bob Skinstad, but he was the solid anchor to a very fine backrow.

7 Schalk Burger ’03- : 6’4, 110kg
Despite a short career in optometry, you don’t get to be the IRB player of the year for nothing. Has been a bit out of form since ’07 but has been invaluable to the Boks cause. I haven’t opted for Brussouw, as he has really only just arrived on the scene, although on current form he would be here.

5 Victor Matfield ’01-: 6’7, 110kg
One half of probably the strongest second row combination this decade. Line out extroadinaire, who is fairly handy around the park, too.

3 Cobus Visagie ’99-’03 : 6’0, 118kg
It’s odd that as far as scrummagers go, Cobus has been oft overlooked. He along with Pagel, Garvie and perhaps Kempson is on of the finest props we have produced. The difference with Cobus is that he doesn’t just try to overpower people, he is a technician who breaks them down and ties them into a pretzel.

2 John Smit (c) ’00- : 6’2, 117kg
A brilliant captain, and before his stint at prop, probably one of the world’s best hookers. I restore him to his strongest position and give him the captaincy in my team.

1 Os du Rant ’94-’07 : 6’3, 125kg
The big legend himself. Os revolutionised the way props played, from not just being there for the tight phases, but to actually forming part of a running defense system and in his case actually chasing people down! Left the game in 2000 due to serious injuries and blew out to a reportedly 150kg+ on his farm until coming back to provincial rugby in ’03. Made the Bok sqaud in ’04 and the rest, they say, is history as he joined a select few with 2 RWC medals