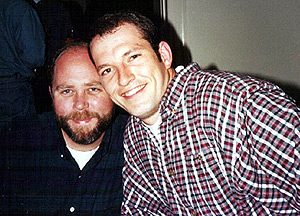 Good on Gareth Thomas for revealing to The Sunday Times that he is gay and wants to come out of the closet. Thomas, aged 35, is at the end of a great career that saw him captain the British and Irish Lions and become the most-capped Welsh player.

But we shouldn’t get too carried away about the bravery involved in the decision.

A cynic might suggest, in fact, that a tell-all book, along the lines of the Andre Agassi model, is probably on the way.

The fact of the matter is that the news that Thomas is gay is hardly earth-shattering stuff.

Most British rugby journalists knew that Thomas was gay. His career was never threatened. Players in the Welsh squad knew as well. They, like the rugby media, protected his secret.

It is hardly as if Thomas is the first Welsh rugby identity to come out in recent times. Nigel Owens, the dapper, neat-as-a-pin international rugby referee, with his high-pitched Welsh voice, came out a couple of years ago.

Although he had contemplated committing suicide earlier, Owens’ career continued on its upward trajectory after he made his announcement.

This season, for instance, he refereed England-Argentina at Twickenham and Ireland-South Africa at Croke Park.

It has suited the gay reform movement to paint male team sports as bastions of gay-bashing. But, in fact, it is difficult to think of occasions in recent years when someone coming out as gay in a team sport environment has suffered.

Simon Barnes, the brilliant award-winning sports columnist for The Times, has written a foolish piece about how Thomas’ announcement has dragged sport’s secret out of the closet.

“In questions of sexuality,” he writes, “male team sports have always been in perpetual flight from the very notion of homosexuality.”

Barnes has no understanding of matters relating to rugby union.

There was no mention of Owens in his attempts to implicate male sports teams as homophobic bastions. Nor is there any reference to Mark Bingham, whose life and death refutes Barnes’ silly and uninformed attack.

And who was Mark Bingham?

He was one of the heroes of United Flight 93, on that terrible day known to history as 9/11.

Four terrorists on board captured the plane and tried to crash it into the Pentagon. The 9/11 Commission has published details on how Bingham and some other passengers attempted to retake the plane about 30 minutes after it has been commandeered.

The passengers put the plane into a nose dive that sent it crashing into a field in Pennsylvania, rather than the Pentagon. They lost their own lives but saved many hundreds of other lives through their bravery.

Before the plane crash, Bingham made a call to his mother. His mother, who had worked as a flight attendant on United Airlines, left a voice message to her son telling him he had to re-take the plane.

This bravery on the part of Bingham was typical.

After the crash, Bingham’s partner, Paul Holm, told the media that Bingham had protected him against several attempted muggings, one of them at gunpoint.

“He hated to lose at anything,” Holm said about Bingham. He went on to relate how Bingham carried scars he’d gained from running the bulls in Pamploma.

The back story to Bingham that captured the attention of the US media was that he was not only a proud gay man, he was also a passionate rugby man who founded gay rugby teams, organised tournaments for them, played number 8 (he was 1.93cm and 102kg), and taught his team-mates his favourite rugby songs.

After Bingham’s exploits on United Flight 93 came out, T-shirts started appearing around the United States with these words on them: TERRORISTS BEWARE, RUGBY PLAYERS ON BOARD.

The details of Mark Bingham’s story (some of them used in this article) are related in his Wikipedia biography.

He lived an impressive life by any standards.

He was a successful businessman and a role model (Simon Barnes take note) for everyone who plays and supports a team sport like rugby. He was inclusive and combative, in the best traditions of the rugby game.

One of his best-remembered quotes to encourage gay men to play rugby is this:  “This is a great opportunity to change a lot of people’s minds, and to reach a group that might never have had to know or hear about gay people … Let’s go and make some new friends … and win a few games.”

Bingham’s deeds on United Flight 93 have been portrayed in three movies.

The Mark Kendall Bingham Memorial Tournament, established in 2002, is a bi-annual international rugby union competition for gay and bisexual men.

Melissa Etheridge has written a song, Tuesday Morning, in his memory.

Gareth Thomas, like Nigel Owens, has shown courage to come out. But Mark Bingham, a rugby player who never hid his sexuality, will forever be rugby union’s iconic gay player.