Schumacher returns for a legacy or misery 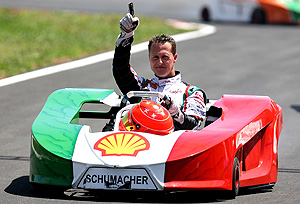 Michael Schumacher, from Germany celebrating at the end of the karting event charity race International Challenge of the Stars. AP Photo/ Nabor Goulart

He’s back! Seven-time Formula 1 world champion Michael Schumacher will return to the sport in 2010 with Mercedes, the team that, as Brawn GP, won both world titles in 2009.

Remarkably, the German will be 41 years-old when he lines up in Bahrain for the season opener in March, and he’s eying an eighth world title to confirm his greatness.

“Our aim can only be to fight for the championship,” he said, bluntly, in the press release.

Speculation has been growing for months of an imminent return to the sport he left as a driver in 2006, after his planned comeback to replace the injured Felipe Massa at Ferrari this season fell through due to a neck injury.

Now, with Mercedes returning to the sport as a full manufacturer having taken over the Brawn GP outfit, Schumacher will be reunited with the German manufacturer and Ross Brawn, the mastermind behind each one of his seven world titles, at Benetton and Ferrari.

Returning with Mercedes and not Ferrari may surprise many, but there is unfinished business for both parties.

As a Mercedes development driver in his formative years, he was snapped from Mercedes’ grasp when they stagnated on their Formula 1 commitment and he shone with Benetton.

Schumacher was a bane for Mercedes as he conquered the 2000s with Ferrari, overcoming the challenge of Mika Hakkinen and McLaren Mercedes, beginning his five-year reign in 2000 against the Finn, who was his greatest rival.

The irony of a German driver battling against Germany’s premier manufacturer was not lost in the mother country, and there will be great pleasure in the Stuttgart headquarters of Mercedes at having finally secured the greatest German sportsman, separating him from Ferrari.

Can they win the world title together?

He will be racing for the team that guided Jenson Button to the title, and while many question his age, let’s not forget how comprehensively he ruled F1, with Ross Brawn, and how he set the bar so high for fitness and commitment.

Much will depend on the competitiveness of the Mercedes-Brawn package: whether their 2009 championship fight impeded their development of this year’s car and how quickly Brawn can be assimilated with Mercedes as an owner.

With F1 having been robbed of depth in the midpack with the withdrawal of BMW and Toyota, Schumacher and Mercedes should be in the leading pack with Ferrari, McLaren and Mark Webber’s Red Bull team.

The prospects of an eight-world title for the Schu remain to be seen.

But the question fans worldwide will be asking at present is why he is returning to a sport with an inherent danger at his age; racing against competitors he is old enough to father.

He is astronomically wealthy, and it’s unlikely the family man would’ve lost that fortune through excess. He owns the most important records in the sport already: most championships, wins, pole positions, points, podiums, fastest laps, and on it goes.

Legends often worry about legacies, but Schumacher’s, in the cold hard light of retrospection remains tarnished by his on track misdemeanours, of which there are too many to list here, that spilt over from his incessant quest to dominate.

Perhaps he knows that, and he is seeking the eight-world title to try and correct that legacy.

If he does win the world title, defeating the new guard of Fernando Alonso, Lewis Hamilton, Sebastian Vettel and Jenson Button, there will be no denying his greatness.

On the flipside, if Mercedes isn’t competitive, how will he cope with being at the tail-end of the midpack? Remember this is a driver who was never far from the podium, even when Ferrari stumbled in his final two seasons. How will he rationalise his comeback if he cannot compete for wins?

Perhaps, some say, he will be content in just racing.

Schumacher was often seen mingling on the Ferrari pit wall at the races he attended in his retirement, and he attempted to quench his thirst for speed by racing Superbikes, principally in the German championship.

The reality is, for a man with two children, the cocoon of a Formula 1 cockpit is a safer place than on top of Honda Fireblade, as his neck injury suffered in the fall that deprived him of his Ferrari comeback shows.

He may just feel the need for speed, but for a driver with such a hunger and drive, you sense that he is eyeing that eighth world title, and a chance to redeem his legacy against the generation that replaced him.

Whatever the result, Formula 1 will be so much richer for his return – a tantalising prospect that adds so much intrigue to the 2010 season.